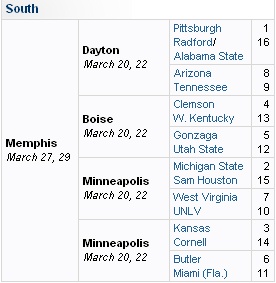 Everyone (including us) is making their bracket projections now that the season is winding down and conference tournaments are nearly upon us.  Before December, Gonzaga fans expected to be, at worst, a three seed in this years NCAA Tournament.  After a torrid December, most bracketologists think that Gonzaga is a five thru seven seed.  The people at CBS Sports chimed in today with their projections and it has Gonzaga placed quite favorably.  A game in Boise against Utah State would be just what the doctor ordered for the Zags.  I know that some of the folks at Utah State will travel to the close location in Boise but after watching the Aggies against St. Mary's, it is pretty clear that Utah State is a product of some pretty wise scheduling.  The Clemson Tigers would lie in waiting if Gonzaga was able to get around Utah State.  This is an intriguing match up because Clemson, like Gonzaga, is notoriously bad in late season situations.  In fact, I wouldn't completely write off Western Kentucky in their first round match up.  The top part of that group of eight features some heavy hitters.  Arizona, Tennessee, and Pitt are all big name programs.  This bracket sets up beautifully for a very tough Pitt team.  Arizona and Tennessee are both running teams that play at a fast pace and Pitt would methodically slow them down and probably run them out of the gym.

It's always fun to think about what one seeds we think that Gonzaga would match up well against.  The good thing about Gonzaga taking on a team like Pitt is that it appears that Josh Heytvelt is playing about as good as he ever has and is showing his versatility.  Against a player like a DeJuan Blair, versatility would be huge because he would probably take Blair outside where he is uncomfortable.  DeJuan tends to become quite foul prone early in games when he is not comfortable and I really wouldn't mind seeing the Panthers as a one seed in Gonzaga's bracket.  The big issue would be Sam Young because I don't think that the Zags have a player with Young's size and quickness to match up with him.  Micah Downs has the length but Young is such a massive wing that he would be such a difficult player to take on.  The optimal one seed for Gonzaga, in my opinion, would be Oklahoma and UConn, especially since they have no Jerome Dyson.

Obviously, the brackets change everyday with upsets and things like that but expect the Zags to be consistently rising from here on out.  Looking at the four seeds, I think that Gonzaga, if they keep playing well, can rise up off the five line and get to a four.  Missouri has a tough rest of the way in the Big 12 and Villanova and Clemson both play in very difficult conferences.  All these four seeds are at risk of making major mistakes but they are also a few quality wins away from getting themselves on the two or three line, especially a team like Missouri.  When it is all said and done, a five loss Gonzaga team will look pretty attractive to the selection committee, especially if they keep putting up gaudy numbers against the WCC.