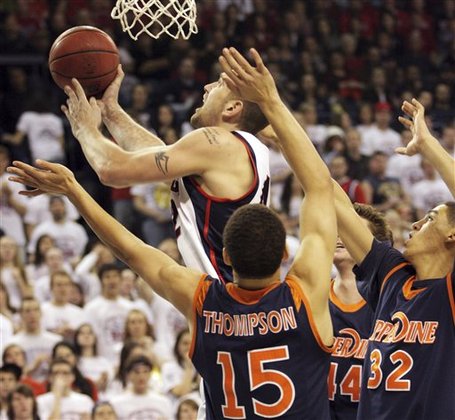 You couldn't help but feel good for Josh Heytvelt tonight.  The embattled center has had a tumultous five years in Spokane but he capped off his home conference career with a bang tonight.  Heytvelt, who had been building up to  major game for a couple weeks now, finished the game with 28 points and 11 rebounds as the Zags downed Pepperdine, 92-58.  Josh did nothing out of the ordinary tonight as we have become well acquainted with his big performances coming against the Waves.  In their first match up this season, Josh scored 25 points in another big Gonzaga victoy.

Even though Heytvelt stole the show tonight in Spokane, he wasn't the only Bulldog that played well.  Junior guard Matt Bouldin had an outstanding first half of basketball and finished with 16 points, all coming in the first twenty minutes.  Matt had a very confident jumper early on and hit several three pointers before taking it easy in the second half.  Although he shot 0-5 from beyond the arc, senior wing Micah Downs finished with 14 points and was equally impressive on the defensive side of the court, finishing with three steals.  Speaking of unhearlded, congratulations to senior guard Jeremy Pargo who took over sole posession of fourth place on Gonzaga's all-time assists list with 557.  His three assists tonight broke the tie he held on fourth place with John Stockton, who happens to be the all-time NBA assist leader.  Not bad company.

Overall, the game was basically a carbon copy of the LMU game a few days before.  Mark Few once again did a great job making sure that the offense ran through Josh Heytvelt which is going to become very important as tournament time approaches.  There is no doubt that Josh's confidence has got to be about as high as it ever has and he really capitalized on his opportunities, making 12 of his 17 attempts.  Credit must also be given to the guards tonight as they fed the post with extreme ease.  In fact, Gonzaga only turned the ball over eight times tonight which is a very welcome number based on previous total.  The man defense stifled the Waves tonight as they shot a chilly 34% from the field.  Hopefully the man defense continues to show up as we get closer and closer to the tournament.

Congrats to the Zags on their ninth straight regular season conference championship.  While the season has had it's ups and downs, nine straight is an amazing accomplishment for Mark Few and this Gonzaga team.  The Zags' WCC schedule concludes on the road this coming week with games against Santa Clara and San Diego before returning home to finish off the season against mighty South Carolina Upstate.