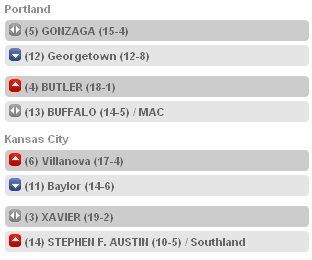 Georgetown has completely fallen off in the Big East and it does not look like they will be able to make the tournament if they continue to be mediocre.  They've had some quality wins early on in the season but lately they have been bad.  Georgetown is still a very talented Big East team and they would definitely be a tough 12 seed.

Butler is #27 in KenPom so I guess it is time for me to give them some respect.  It would be a very intriguing Mid-Major match up but I would love the Zags in that game.

We'll have our bracket up tomorrow but just remember that with all the upsets going on this year, Gonzaga is in prime position to do something none of us thought they could do after they lost to Portland State.  Keep winning, and they could find themselves on that three or even two line if they run the table here on out and win the tournament.  Four losses is going to look really good come tournament time if the Zags don't slip up.

For the whole bracket...click here.