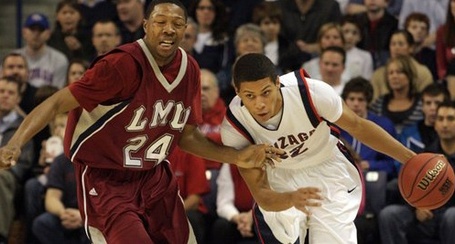 Tonight was a perfect example of what happens when a two win team in the WCC visits a hungry Gonzaga team. There was no slow start for the Zags as I believe they jumped out to a 17-2 lead to start the game even though LMU got the brownie points with their first two points coming off an alley-oop dunk. For the Lions, it was all downhill from there. It's very difficult to judge a game when the opponent is a team like LMU but Gonzaga appeared to have an extra gear tonight. The Zags, who defeated the Lions 91-54, were led by the two players that have been battling for a spot in the starting lineup this season. Steven Gray, who has been relegated to the sixth man role, came out hot tonight, shooting 7-10 from the floor including 5-7 from three-point range. Micah Downs, who began the year as a starter and has recently returned to that role, had 16 points on 4-9 shooting. Both players finished with six rebounds and Downs finished with two blocked shots.

continue reading after the jump for more LMU-Gonzaga reactions....

Instead of playing down to their opponent like we saw in games against Saint Mary's (minus Mills) and San Francisco, Gonzaga dominated the entire game. It was obvious that the game plan from the very beginning was to feed the ball to Josh Heytvelt as much as possible. The big fella had tons of touches and was able to capitalize on six of his 13 shots and also hit all six of his free throws to finish with 18 points on the night. Aside from a few ill-timed three point attempts, Josh appeared to really establish himself in the post and flex his muscle against the very miniscule Lion defense. LMU was unable to find anyone to body Josh and it was apparent that they were getting quite frustrated with his ability to do whatever he wanted. He showed a number of excellent post moves including the old fade away from the block that we saw in his outstanding sophomore season. Granted, a lot of the credit has to go to LMU for just not being that good but Heytvelt was very impressive in the post tonight I thought. Josh has been gaining a lot of confidence recently and might be playing some of the best basketball on this team right now. If he can continue to play strong in the post and give this team a legit center, this team will be able to truly reach their potential...finally.

Mark Few might just read this blog (probably not). We have been hooting and hollering for the man defense for quite some time and tonight it was ran to perfection. Instead of allowing some LMU player to get hot from outside, Gonzaga was very intense on defense and even pressured the ball when they were up 30 points. The result of the tight man defense was a shooting performance of 20-63 from the field and 7-24 from the three point line. I know LMU is bad but so is USF and they were well above those totals when the Zags visited San Francisco this past weekend. Gonzaga forced 16 turnovers out of the Lions and completely took them out of their comfort zone. The man defense was spearheaded by Micah Downs who just does it all for this team. His hustle is outstanding to watch. He's such a versatile defender because on any given night he can lead the team in steals or he can lead the team in blocked shots.

If they can keep playing the way they did tonight, I love what Micah Downs and Steven Gray can bring this team. With Micah in to start the game, you can pressure the other team early on defense and establish the tempo in your direction. Steven Gray off the bench is probably every coaches dream. Gray is a very serviceable defender and, when on, one of the purest shooters in the nation. These two excel in very different areas and that is a great thing because that fifth/sixth man spot allows for some imagination from the coaching staff and that is what they need. The past few weeks has been the same, monotonous, Gonzaga basketball team but they seemed reinvigorated tonight and you have to give the staff tons of credit for getting them fired up for the lowly Lions.

Not too many negatives to report. Looking at the box score, Gonzaga turned the ball over 15 times but I'm pretty sure 4-5 of those came late in the game on entry passes to Foster so we'll leave that alone. There is no doubting that a major concern was whether or not this team could stay energized and focused during this lull in the schedule but if tonight was any indication, the Zags should be just fine.