Share All sharing options for: It is what it is... 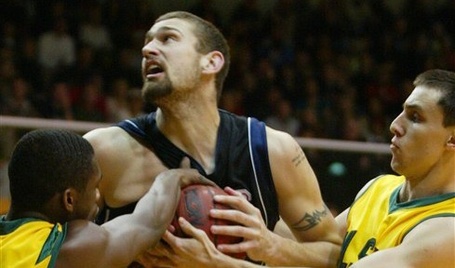 The California road swing turned out to be much more difficult than I had anticipated. The good news is that the Zags return home with two more conference wins. The bad news is that neither win came in impressive fashion and with the season winding down, Gonzaga has more questions than ever.

The Zags eeked out a five point victory tonight over the San Francisco Dons in San Fran. It's not like USF made it close late either. This game was tight throughout and the Dons actually tied the game up in the second half and push the Bulldogs to the brink. When it was all said and done, Gonzaga pulled out the victory mainly because the athleticism difference was just too much for the Dons (who suited up eight players tonight after Rex Walters suspended four players this week). Austin Daye stepped up tonight, scoring 17 points on 5-8 shooting. He had an excellent second half and it looks like his shot that was missing for a number of games has returned. Daye was great, but this game was about the emergence of another Zag.

continue reading after the jump...

Demetri Goodson was simply sensational. In 25 minutes, the freshman was 5-7 from the field and scored 13 points. He also finished with a couple of assists. Meech was able to carve up the Dons defense and get to the rack with ease. He also showed off some range with two three-pointers. After a performance like that, the youngsters confidence has got to be sky high and hopefully we will see more of Meech as the year winds down. I'm not starting a "bench Jeremy Pargo" fan club but Meech has been consistently impressive all year. He's also proven that he can control the ball and only had one turnover (compared to four for Pargo in 29 minutes). We even saw Meech and Pargo on the court at the same time at a few points in the game and it worked pretty well. I feel like Meech is one of those players that you know what you are going to get on a consistent basis and he is rarely going to try and do things that hurt the team.

As good as Meech was, everything else was just kind of blah. Gonzaga got off to another slow start and once again looked pretty lifeless. The main issue tonight was on the defensive side of the ball as the zone defense continues to be a mystery to us. The Dons absolutely killed Gonzaga from beyond the arc, putting up one of the more impressive three-point shooting nights you'll see. They were 14-22 from beyond the arc. They hit nine shots from inside the three-point line. The zone was played for a majority of the game and the same things happened. Rotations were late, penetration sucked defenders in, and USF made their shots. You can bet the mortgage that every WCC team that Gonzaga plays on the road from here on out will challenge because of the zone defense. Everyone has got a shooter than can expose it, and from what we've seen, Mark Few is in no hurry to adjust...until the last two minutes of the game.

I'd like to congratulate Micah Downs for being the only Gonzaga Bulldog with zero turnovers tonight. Jeremy Pargo, Josh Heytvelt, and Austin Daye made up for Downs' good play with four turnovers apiece. Turnovers for a major issue for Gonzaga all night as they gave the ball to the Dons 16 times. They were miserable turnovers too. Jeremy Pargo dribbled the ball into the stomach of the defense a couple of times and Austin Daye handed over a few rebounds after putting the ball low enough for the Dons to snatch at it.

Like MedZag said after the St. Mary's loss, maybe it is time to start embracing what this team is instead of what we think it should be. Here's what it is: Gonzaga toughed out a close win against a rival tonight but I think we all know what it should have been. Andrew Sorenson should have played some but instead it was a five point game at halftime and Gonzaga seemed pretty content with keeping the game close. If you were reading the blog before the season started, you know that we were buying all the hype. We sit here now as a five loss team that just beat a 9-17 USF team by five points relatively late in the season. I don't think any of us expected this to be the case. The five losses is okay with me because all of college basketball has been wacky but the performance on the court is disturbing. But, like MedZag said, it's time to embrace our Zags for what they are, even if we aren't sure what that is yet.

Is there any more Old Spice Classic/38 minutes of the UConn game Gonzaga Bulldogs left?