A Few Noteworthy Points of Interest

Share All sharing options for: A Few Noteworthy Points of Interest

Gonzaga 72, St. Mary's 70. We checked into this one to see if St. Mary's could parlay its raucous home crowd into an upset over Gonzaga without their star, Patty Mills, on the floor.  The answer was no, but one thing is fairly clear to us - St. Mary's is the best team in the WCC with Patty Mills, and it's really not close.  The Gaels were unbeaten and whipping Gonzaga when he was injured in Spokane, and the fact that they were this close at home with the mercurial Mills playing announcer (still can't get over that accent...), convinces us that SMC is the better team.  Gonzaga has better individual talent in our eyes, but for some reason, they're just not maximizing their potential this season (or any season).  Josh Heytvelt had 20/10 but it was his three missed FTs down the stretch that kept the door open for St. Mary's, who had two possessions in the last ten seconds to win the game.  Keep an eye on SMC in the NCAAs, but forget about the Zags.

Point two...Joe Lunardi has a new Bracketology up this morning. 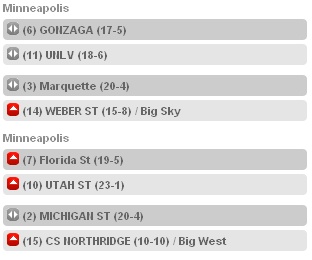 At least maybe Sam Dower can see his future team live in action with this bracket.  Other than that, I don't really care for this bracket too much.  UNLV always scares me come tournament time and their star guard Wink Adams is an absolute gamer.  Marquette in the second round would be an extraordinarily tough match up for Gonzaga as they have a starting five about as good as anyone in the nation.  Not to mention the fact that Marquette is about 300 miles away from Minneapolis so it would be a very pro-Marquette crowd.