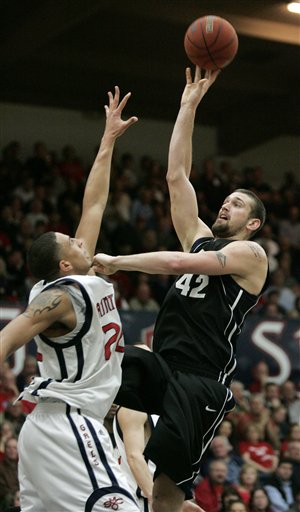 I'll be the first to admit it. I'm guilty. I expected way too much of this team coming into the season. The talent level of this Gonzaga Bulldogs team is through the roof on paper but it has become pretty obvious that through 23 games this team is not ready for the big time. Each game since December, with some minor exceptions, seems to bring up the same issues. Rebounding, free-throw shooting, chemistry, inconsistency, etc, etc, etc. Tonight, each of these issues came out in full force and nearly cost Gonzaga the game.

Here's the AP style recap: Gonzaga won a nailbiter in Moraga tonight, 72-70 over a fiesty St. Mary's squad, who was missing their heart and soul, Patty Mills. Josh Heytvelt was brilliant tonight in 34 minutes. He really controlled the paint in his 20 point, 10 rebound performance. Matt Bouldin continues to put up gaudy stats against the WCC with 21 points.

my take after the jump...it's an elaboration of the first paragraph, not the second.

I'm not much for AP style recaps because they sound so pretty. If you saw tonight's game, it was pretty obvious that there was not really anything pretty about this game, well except for the new black uniforms, which are excellent.

The game started just the way we have become accustomed to Gonzaga games starting, slow and lacking enthusiasm (we're a second half team). Steven Gray nailed the first basket of the game and then caught the early flight out of San Francisco. Zags have a 3-0 lead, time to pour it on! Right? Nope, new uniforms, same team wearing them. St. Mary's hung around despite looking like an extremely mediocre West Coast Conference team. Normally a reserve, St. Mary's Wayne Hunter made his push for WCC player of the year tonight and played quite well, keeping his team close in the first half after hitting a number of threes. Gonzaga was ice cold in the first half and never got on track shooting the basketball early on. To add to the poor shooting, St. Mary's was the more energized team and played like the wanted it. It showed in a number of areas that have plagued Gonzaga all season.

This is my favorite possession of the game as it really sums up the majority of the evening in Moraga.

Three St. Mary's rebounds, including two on the offensive glass, a Gonzaga foul, and a missed Simpson free throw. Gonzaga was murdered on the glass tonight, especially in key times. The final tally came out to 45-33 in favor of the Gaels. Diamon Simpson was an absolute man for the Gaels, pulling down 15 rebounds on his own. No player has been more impressive on a consistent basis against Gonzaga than Diamon.

The rebounding situation for Gonzaga is not a new issue. I don't think that there is a question that the rebounding problems that Gonzaga has is in direct correlation with the zone defense that the coaching staff has fallen in love with. I understand the zone defense to start the game because Mark Few really does try to hide Austin Daye on the defensive side as he has the tendency to pick up early fouls that sideline him. It's clear that he simply can't match up the size and grit of Omar Samhan and Simpson. However, in the second half, when Omar Samhan is a complete non-factor and you are playing a team with a marginal basketball players like St. Mary's, you can afford to man-up and play defense so that Carlin Hughes does not victimize you with three-pointers late in the game. Every single game in Moraga seems to have one St. Mary's shooter get hot. Last year it was Todd Golden and this year it was Hughes late in the game. Get Matt Bouldin out in his face and make him run around and get him out of his element. He's not Stephen Curry but he is a division 1 basketball player The three-pointer he shot from Josh Heytvelt's armpit was pure luck but he was able to stand there, size it up, pump, and draw what should have been a foul and sink the shot. In Spokane, you can get away with the zone most times because a guy like Hughes will not get hot away from home but in Moraga, with his student body behind him, you have to account for streaky shooters.

Like I said in the opener, what we saw tonight is a 23-game-old problem. It's not like St. Mary's came out and played their best game tonight. They shot 57% from the free-throw line and turned the ball over more than Gonzaga. They may also have gotten hosed on a call late. They have just as many excuses as Gonzaga about why this game wound up the way it did. I apologize if this post is a completely frustrated one but it's hard to look at the talent on the court and live with some of the results we have seen. It's a total matter of chemistry and leadership. We talked about the same things way back in December and I honestly thought the leadership aspect of this team would change once we got some conference wins and started rolling again. There is just no identity this year. We raved about the depth but it has gotten so inconsistent that it is anyone's guess as to who is going to show up which days. Tonight it was Josh Heytvelt and Matt Bouldin who played well. Against Memphis it was Josh and Micah. Against UConn it was Jeremy and Steven. Other games it has been Austin but we have rarely seen any sort of consistent effort from everyone. It shouldn't be a maturity issue. Gonzaga has one freshman playing this season and everyone else, aside from Will, is familiar with big time minutes or is 26 years old.

I guess we can blame it on the fact that in the two biggest games in front of pro-Gonzaga crowds, UConn and Memphis, the Zags lost. That's got to take a toll but you are telling me that a team like Notre Dame, who hasn't won a game in weeks was in a better emotional state than Gonzaga? But they went out tonight and dominated one of the best teams in the nation from start to finish. It's not because they have more talent or depth than Gonzaga, it's because they have an identity and they rode their workhorses and played with emotion.

The sad thing for Gonzaga fans now is that there are no more games for this team to really get their swagger back. The next three opponents have six combined victories in conference play and 18 wins total, which is exactly the same number of wins that the Zags have after defeating St. Mary's tonight.