Gonzaga at St. Mary's: The Rematch?

Share All sharing options for: Gonzaga at St. Mary's: The Rematch? 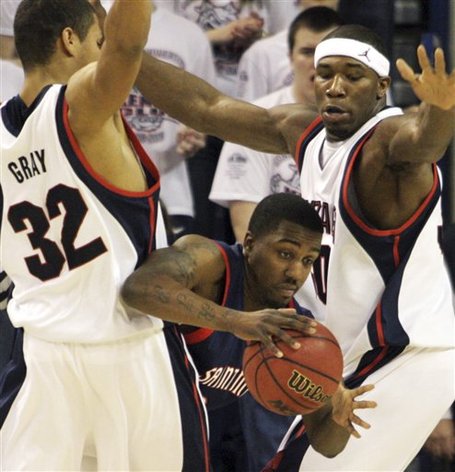 On January 29th, St.Mary's arrived in Spokane with a 15 game winning streak and the belief that this was the year that they were going to win the WCC. After a terrific first half performance, which saw the Gaels lead 39-33 at the break, it seemed that all the hype surrounding this game was worthwhile. However, a serious injury to Patty Mills at the end of the first half took the life out of St. Mary's, and the Zags ran away with a 69-62 victory. Since the loss of Patty Mills, the Gaels have been in self-destruct mode, and have lost 3 of their last 4 games. Sadly for St. Mary's fans, the teams hasn't been competitive in losses to Portland (84-66) and Santa Clara (80-62).

continue reading the rest of the post after the jump...

Prior to the injury to Mills, the Gaels had a terrific three-headed monster of Mills, Samhan, and Simpson. However, the problem with this team is the lack of depth at the guard position. They have no play who can even come close to the impact that Patty had when he was on the court, and you can see this in the struggles of Samhan and Simpson. These two thrived off of Mills creating good looks for them, but now that they have no PG to dominate the ball, the open looks are gone.

I expect to see the Zags switch up their lineup from the demolition that occurred against Memphis. There is no way that Coach Few can trot out the same group that played so lifeless and inept against the Tigers. Gonzaga will face an incredibly tough atmosphere in Moraga, and it would be a great place to debut a new lineup and see what chemistry works with certain guys. In my opinion, these next couple of games are not just about getting a victory, instead they are about improving chemistry and experimenting with different combination's of guys. It's vital that Gonzaga doesn't just settle for WCC wins, but instead puts together dominant performances that will help built toward a terrific run in March. Yesterday, Memphis dominated Tulsa, in a match up of the top two teams in Conference USA. I expect to see the Zags come out and put together a similar performance against all of the WCC the rest of the season.

While I expect it to be a shaky opening 5 minutes for the Zags, this team should be motivated and determined to dominate. It's time for the seniors to step up and make this their team, and I expect that to happen tonight. Behind terrific performances from Jeremy Pargo and Austin Daye, the Zags coast to a 85-59 victory.