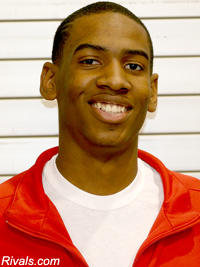 When Gonzaga went into Texas to get Demetri Goodson out of Klein Collins High School, Mark Few opened up a fantastic pipeline to Texas that Gonzaga fans have never been too familiar with.  Meech has been the lone freshman to contribute this season with Andy Poling and Grant Gibbs redshirting.  He has been outstanding in limited minutes behind Jeremy Pargo and it appears that another Texas guard has emerged on Gonzaga's radar.  Jamel Outler is a shooting guard from Bellaire High School in Houston, Texas.  His lone offer comes from Texas A&M but he has interest from the likes of Kentucky, Texas, Pittsburgh, and Gonzaga.  Thus far through the season, Outler is averaging 14.3 points per game for his high school squad.  We caught up with Mr. Sam Khan Jr. of the Houston Chronicle to learn more about this prospect.  Here is what he had to say...

Slipper Still Fits:  What kind of role does Jamel play for his Bellaire team? Does he have the ability to be a go-to scorer and takeover games?

Sam Khan:  It looks like to me that Outler has been a spot up shooter and secondary scorer for Bellaire. He's not their go-to scorer - that is their sophomore guard Sheldon McClellan. I think he does have the ability to be a go-to scorer but Bellaire has so many options that he doesn't have to be. That, and I don't know if he's consistent enough to be a go-to guy.

SSF:  How would you describe Jamel on the offensive end of the court? What are his greatest strengths and weaknesses on offense?

SK:  Jamel is a guy that can score inside and out. His strengths are his outside shooting (his jump shot in general is pretty good) and driving to the hoop - he can finish. As far as weaknesses, I haven't seen a lot of deficiencies skill-wise, but I would like for him to be more consistent.

SSF:  How is Bellaire regarded in the Houston area? Is the coaching strong, and do they turn out D1 prospects on a regular basis?

SK:  Bellaire is regarded as one of the best teams in the Houston area. They are annually in the area's top 10, the coaching is good (they have won four straight district titles in one of the toughest districts despite having some significant player turnover from year to year) and they do regularly turn out D1 prospects. They are what you would consider one of the area's "perennial powers."

continue reading the rest of the interview after the jump...

SSF:  Do you think Jamel's game translates well to the next level, and do you think he has the skill to contribute immediately at the D1 level?

SK:  The quickest way I could see Jamel contributing would be from his long-range shooting and defense. From the times I've seen him, he appears to be a solid on-ball defender. Those two skills always translate if you continue to work hard. I think he could contribute quickly but not as a star or someone who had a ton of minutes as a freshman.

SSF:  Gonzaga landed Demetri Goodson out of Klein Collins, and he has been terrific so far? How would you compare Meech and Jamel at this stage of Jamel's career?

SK:  Meech was more of a pure point guard and I think he was quite a bit more polished than Jamel is at this point. Outler is probably a better shooter and Meech was, but Meech was a better passer and a great leader, who was very consistent.

SSF:  Where would you like to see the biggest improvement in Jamel's game over the next year?

SK:  Consistency. There are some times when I watch Bellaire and he stands out and other times when he doesn't. That could speak to Bellaire's talent level, but if you're going to be a star, you've got to have a star effort night in and night out.