Gonzaga: A State of the Season Address

Share All sharing options for: Gonzaga: A State of the Season Address 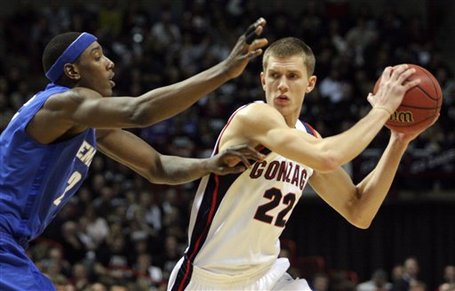 While I was tempted to post a passionate and emotional filled blog immediately after the Memphis game, I decided it would be best to take a couple of days to let myself cool down. It has now been over 48 hours since the debacle ended, and I have seen my emotions range from anger to frustration and even a little bit of optimism. Before I analyze the game and this Gonzaga team, I want to openly admit that I vastly underrated this Memphis team. John Calipari has a group that is loaded with talent and athleticism, and they might have put on the best defensive display that I have ever seen in person.

Entering the game, I felt that the best way for Gonzaga to win was to play at a fast pace and with great intensity and pressure. Apparently I was correct, since the Zags did none of these things, and were subsequently blown off the court. Among the myriad of decisions that left me confused during this game was the choice to play match up zone. Throughout the season, Gonzaga has repeatedly allowed opposing teams to control the glass. When the opponent is USD or USF, the team can rely on their superior skill despite being dominated on the boards. However, against a team as talented and well-coached as Memphis, this is not the case.

This is why I wonder why Coach Few decided to put a terrible rebounding team in a zone defense. I also don't particularly by the argument that the zone was the best defense because Memphis is so much more athletic. Keep in mind that Gonzaga can put the following 5 on the court: Pargo, Gray, Downs, Daye, Heytvelt. This is a tremendously athletic and gifted group, that I honestly believe would have had no trouble playing solid man defense against Memphis. However, Coach Few ignored all the obvious signs throughout the game, and decided to stick with a defense that was hurting the Zags chances of winning. In order for this team to be successful in March, the entire coaching staff must be more willing to adapt and change their game plan on a game-by-game basis.

In my opinion, it's imperative that we see a change in the starting 5 for the St. Mary's game. I have no doubt that the starting lineup of Pargo, Bouldin, Gray, Daye, Heytvelt would have no trouble defeating St. Mary's, but I don't think that is the best group for success in March. It is becoming blatantly clear that Matt "WCC" Boudlin is a great player when he is playing the likes of Portland and St. Mary's. However, when forced to face athletic and disciplined teams, Bouldin struggles. I don't buy into the Tennessee performance, because as we have seen throughout this season, the Vols are pretty marginal team. On the other hand, Micah Downs has been tremendous when playing against the top competition, but has played down to some opponents. If Coach Few is serious about this team being successful in March, there are two things he must do. The first is to start Pargo, Gray, Downs, Daye, Heytvelt the rest of the season. While this unit might not gel immediately, it has over a month to get on the same page. Secondly, Few must be willing to give significant minutes to Meech and Ira. Both have played tremendous basketball over the past month, yet they have not seen consistent playing time. They each bring unique energy and attitude to the court, and provide a great spark for this team.

Over the past couple of days, I have gone back and forth on what I feel the ultimate destiny of this team will be. The more I think about this loss, the more I think that it was an aberration, and that it will prove as a turning point for this team. Saturday was simply a perfect storm of Gonzaga playing its worst basketball of the season against a great team on the national spotlight. Last season, Memphis hosted Tennessee on College Gameday as the #1 team in the country.....and they lost. From that point on, Memphis played with an agenda and a chip on its shoulder. While the Tigers were much more competitive in their defeat, I really believe that Gonzaga can use this loss as motivation and as a reminder that they need to bring their best game every night. We will see what this team is made of throughout the rest of WCC play. If we see a Gonzaga team that blows out each and every opponent and absolutely dominates every facet of the game, then we should expect a great March. However, there is always the chance that this loss showed Gonzaga fans the true colors of this team. We will see over the month what this team is made of, and I truly believe that it is something special.