Twice is Nice: Zags Down Vols in Overtime

Share All sharing options for: Twice is Nice: Zags Down Vols in Overtime

Gonzaga had no business winning this game tonight.

Literally, if you were looking at this game objectively at the start, their is no way you could see the Zags being the favorite.  What was going up against them?  They were playing a ranked opponent in one of the most difficult atmospheres in the nation.  So difficult, in fact, that an opposing team had not won there in 37 attempts.  Oh, and they were coming off two embarassing losses which left them in an identity crisis.

It didn't matter on Wednesday night, however, as the Zags took down the Volunteers of Tennessee in Knoxville.  The score wound up being 89-79 and that is pretty darn accurate.  Yes, it was an overtime game but the second half was largely dominated by the Zags and the overtime period was not even close.  What was even better was that two players that I have been particularly hard on, Matt Bouldin and Austin Daye, were absolutely exquisite tonight.  You have to feel good for these two because they came up big in the most important game of the season for this team.

In fact, this could wind up being the game that saved the season.

continue reading after the jump for more postgame thoughts...

It was a very curious and frustrating first half of pl 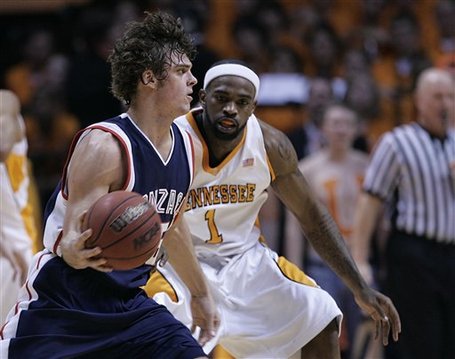 ay.  But, once again, Mark Few proved why he is the coach of this basketball team and why I am just the one complaining.  Gonzaga jumped out to a cute 6-0 lead but it never seemed stable.  In the first two minutes, Tennessee had three offensive rebounds and everyone knew what was about to happen.  The Volunteers, who were plagued by questionable shot selection the entire night, found peace in Cameron Tatum.  The redshirt freshman was the only Volunteer who scored in the first seven and a half minutes of play.  He got the Vols out to a 14-7 lead before the Zags could blink.  Scotty Hopson and Wayne Chism got in the mix soon enough for Tennessee and the lead for Tennessee balooned to 28-14.  The game, in my book, was all but over.  The Zags chipped away at got the lead down to seven points at halftime.  Junior guard Matt Bouldin lead the charge for Gonzaga.  After the Vols scored the first five points of the second half, Bouldin responded with eight points of his own and cut the lead down to six.  Austin Daye and Steven Gray joined in the fun and before you knew it, Gonzaga was in control.  After a missed goaltending call by the officials, the game went into overtime where the Zags cruised.  The Volunteers looked extremely average in the extra session and Daye, Bouldin, and Gray made them pay.  It was an excellent effort by a team that looked like they did around November.

"We just got our swagger back," Daye said.

You have to give a ton of credit to Mark Few and the Gonzaga coaching staff.  I'll admit that I was extremely tough on the staff during the slump but the way these kids battled Wednesday night was extraordinary.  Their were plenty of opportunities for them to fold.  They could have gone down when the game was 28-14.  They could have quit when Tennessee scored the first five points of the second half and the lead was 12.  They could have given up when the refs missed the goal tending call at the end of regulation and the game went into overtime.  They never quit and that has to be directed at the coaching staff.  Another great thing that the coaches did was that they simplified the offense.  They put the guys in positions where they could succeed and Bouldin and Daye really benefited from that.  We saw Matt come off a number of screens near the hoop for easy layins.  Austin Daye also came off screens and nailed jumpers from all over the court.  Josh Heytvelt was also around the basket a lot more tonight and had a statline that I wish he would have every night (15 points, 12 boards).  If the offense continues to rely on screens and back cuts the way it did tonight, guys like Bouldin and Daye are going to shine because they are excellent at moving without the ball. 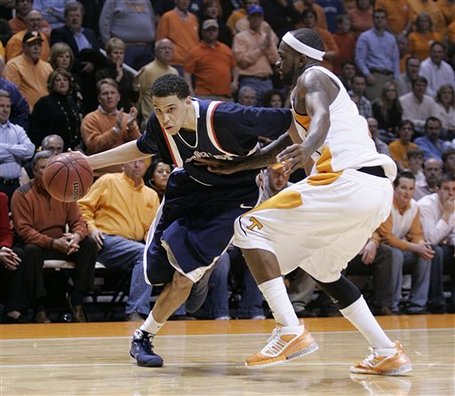 There is something really special about this team when Austin Daye plays the way he did tonight.  It's like when you are watching a hall of fame quarterback.  Every time he drops back, you know he is going to make a great throw and watching Austin play in the second half, you just knew he was going to come up big.  It was funny in the first half because Jay Bilas was all over Austin.  He was saying that he needs to mature and has work to do and is not ready to take over games and then in the second half, he seemed like he was blown away.  I agree with Bilas and hope Daye does stick around but I do believe this is a very mature young man.  He played with four fouls for a great deal of the second half and overtime and played very smart basketball.  He also played tough.  It was a man's game down low tonight and Daye was leading the charge.  He was getting shoved around in the paint but was able to snag eight boards.  The most beautiful stat of the game for me was that Daye and Heytvelt lead the team in rebounds with 20 combined.  This team will be hard to stop if they stay committed to the boards.  It opens up the opportunity for second chance points and quick fast break run-outs.

I've got to give Mark Few even more credit tonight.  And at the same time, I have to give credit to the play of the bench, in particular Will Foster.  It is no secret that the Volunteers are a bunch of undersized athletes in the post.  Mark Few used the length of his players beautifully.  By playing Will Foster and Josh Heytvelt at the same time Wednesday night, he was able to slow down the pace of the game and allow his team to own the glass at key points in the second half.  The Vols did out rebound the Zags by four but you would have never of guessed it by watching the game.  Foster came in and pulled down four rebounds and had a great post move for a basket.  He was able to alter shots in the post and did a number of good things to help his team win tonight.  The rest of the bench was very good as well.  Demetri Goodson came in and played well at the guard position.  He doesn't do much for this team in the stat sheet right now but he is not forcing things and provides another excellent ball handler for this team.  Ira Brown came in and grabbed three quiet rebounds and nailed a very big three-point basket.

So I guess simplicity is the purest brand of science for Gonzaga.  After watching this team against Utah and Portland State, it's hard to believe that tonight's outcome happened.  The beautiful thing about tonight's win is that it could have a "UConn" like effect on this team but instead of being depressed they are now reinvigorated.  Conference play is next for the Zags and there are only a handful of meaningful games remaining in the regular season.  Tonight's victory should provide a very confident spark heading into the next phase of the season.  The icing on the cake for this team is that the next three games are all at the friendly confines of the McCarthey Athletic Center.  They don't travel again until January 22nd so rest should no longer be an issue.