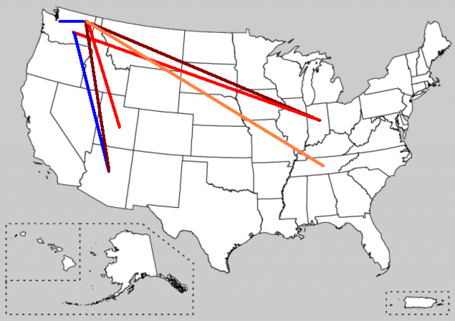 December of 2008 was one of the worst months in Gonzaga basketball history.  After a beautiful November, topped off with a Old Spice Classic victory, the Zags hit the road, making five stops in December.  Gonzaga first traveled to Indiana to take on the Hoosiers.  They returned back to the state of Washington for a very emotional road game in Pullman against Washington State.  The wheels started to fall off four days later when they traveled down South to take on Arizona.  Gonzaga suffered its first loss that night.  Next up were three games in the state of Washington.  They easily took down the junior varsity Texas Southern Tigers on the 18th.  Just two days later they would travel to Seattle to take on the second-ranked Huskies.  The Zags didn't have enough left in the tank and fell in overtime.  This is where it all gets nasty.  Three days after the emotional loss in Seattle, Mark Few decided to schedule the Big Sky Conference champion Portland State Vikings.  There was an enormous emotional letdown and the Vikings took advantage and dominated Gonzaga.  Rounding out the hellish month of December was the Utah Utes who ended the month in a fitting manner; defeating Gonzaga by one point.

Of course this is not news to anyone.  But I just found it absolutely shocking that all this happened in one month.  It honestly feels like that Indiana and Washington State games took place two months ago.  There is no doubt that December was a month to forget but now Gonzaga fans are trying to keep faith that this team is as good as it was back in November.

The Good News?  Gonzaga's outstanding performance against Washington State took place less than a month ago.  So maybe this team can recapture that feeling and remember how to play as a cohesive unit.

The Bad News?  Gonzaga enters one of the most hostile environments tomorrow night to take on the SEC favorite Tennessee Volunteers.  Oh yeah, Knoxville is about 2000 miles away from Spokane which means potential for even more travel lag with this team.

I apologize if you don't find all this as eye-opening as I did.  I got tired just reading about all the road trips this team has taken.  It raises quite a bit of questions about the scheduling this year.  I would expect the next couple of seasons to be a bit more relaxing for this team.  At the same time, when you play in a very weak conference, you have to show the nation your skills somehow.

Here is a chronological look at the month of December...