No Mills, No Problem: Zags Fight Back to Defeat Gaels, 69-62

Share All sharing options for: No Mills, No Problem: Zags Fight Back to Defeat Gaels, 69-62

Last night's game left a lot to be desired.  This game was set up to be the biggest slugfest on the West coast this year until an untimely injury sidelined St. Mary's star guard Patty Mills.  Mills was absolutely on fire before hurting his wrist after a hard fall in the first half.  The lightning quick Australian was doing his best Stephen Curry impersonation as he hit six three point shots in the first half.  To put it as blunt as possible, Gonzaga could not stop him.  They tried Pargo, they tried Steven Gray, and they tried Meech Goodson but nothing worked.

Once Mills was out, Gonzaga attacked.  The Gales held a six point lead going into halftime but that quickly vanished in the second half.  Thanks to the excellent play of guards Matt Bouldin and Steven Gray, Gonzaga dismantled the once very confident St. Mary's team and sent the Gaels home with a seven point loss. 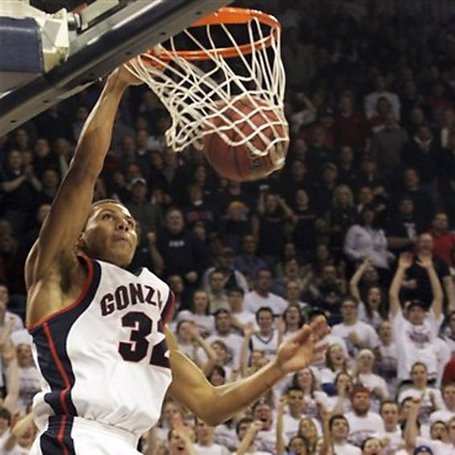 I've rarely been genuinely upset after a win but after the game last night I could not help but be very disappointed.  This was supposed to be the biggest game in the WCC but it was extremely diminished by the Mills injury and the sad thing for Gonzaga is that no one will give them any credit because now St. Mary's has an excuse for the loss.  Would the Zags have lost if Mills wouldn't have gotten injured?  It's really, really hard to sit here and say that Gonzaga would have been able to stop Patty.  He was absolutely unconscious from beyond the arc from the get go and Gonzaga did not have an answer for him.  Like we said a few days ago in our Patty Mills feature, he is extraordinarily streaky but he brought it last night.  There is no doubt in my mind anymore that I got to watch the best player in the WCC for one half of basketball last night.  There are a couple of directions I need to go in this breakdown so bear with me...

The defense is for real

Everyone kind of assumed that Gonzaga's defensive field goal percentage statistics were extremely inflated.  The argument has some validity, I mean for the past couple weeks the Zags have been playing teams that are barely division one teams.  Last night was a huge game for Gonzaga's defense because they were taking on a team that scores in bunches.  When you play a team like St. Mary's, with players like Diamon Simpson and Patty Mills, the goal is to stop the supporting cast from hurting you.  This was executed perfectly.  Simpson was unreal last night.  He was 7-7 from the field but shot some of the ugliest free throws I have ever seen.  The supporting cast of Carlin Hughes, Ian O'Leary, Omar Samhan, Micky McConnell, and Clint Steindl went 7-31.  O'Leary, Steindl, and Hughes all played terrible games tonight and it really seemed like the big game atmosphere was too much for these kids.  It didn't help them that Gonzaga was playing a suffocating brand of defense.  There were a number of St. Mary's possessions where they couldn't find a shot and made bad passes leading to turnovers, or get a pass tipped out of bounds, and even on a couple occasions, Gonzaga forced shot clock violations.  Gonzaga reduced St. Mary's to half court team and that is something the Gaels are not used to.

Another marginal game for the 'old guys'

Micah Downs, Josh Heytvelt and Jeremy Pargo shot 9-23 in last night's win.  Yikes.  If you would have told me that stat before the game started, I don't think I could have imagined Gonzaga winning.  Micah Downs did have a hoop shattering dunk in the second half to get everyone fired up but aside from that, it was a very mediocre game for Gonzaga's senior leaders.  Last night was an odd game for Jeremy Pargo who really struggled in the first half but I thought showed great improvement in the second half.  Pargo was noticeably frustrated with himself in the first half.  He only had five points in the first half and for a large part of the game it didn't really even feel like he was on the court.  He seemed to become the Pargo of old in the second half, and even though a number of his drives were not connecting, it was nice seeing him get to the hoops.  I'm not sure what I expect from Josh Heytvelt anymore.  There are games where I think he is one of hte best big men in the nation and then their are games where I am screaming for the redshirt to come off Andy Poling.  There's not real point in bashing Josh because he has been a very good player this year but the physicality of Omar Samhan seemed to really bother him.  I think that it is very key that Mark Few gets Josh involved in games early or he tends to lose interest at some points.  I always pray that Josh kicks off the game with an alley oop dunk because he can play with such passion if he gets going in the right direction.

St. Mary's is a tournament team.  There is no doubt in my mind that I was watching a team capable of making a nice run come March.  They really do have all the pieces in place.  They've got one of the best guards in the nation, one of the best forwards in the nation, and a center with a mean streak who has a very good inside out game.  Even if you are a Gonzaga fan, you have to keep your fingers crossed that the Gaels don't go into a tailspin now because it looks like Mills will be out for a long time.  I guess we can start opening the champagne now because I don't think any team can really challenge Gonzaga, except for maybe Portland when the Zags travel out there.  The Mills injury now means that he will be out for the February 12th game but hopefully he will be back for the WCC Tournament.  I can't imagine the bloodbath of a game that will be in Las Vegas.  And I'm pretty sure the Zags and Gaels will have pretty easy roads to the final game.

A win is a win is a win and you have to get plenty of credit to Gonzaga for fighting back and defeating St. Mary's.  When we look back on the game in March, all we will really remember is that it was a nice home win against the hated Gaels.