The #1 Reason why Gonzaga is Still Considered a Mid-Major: LMU

Share All sharing options for: The #1 Reason why Gonzaga is Still Considered a Mid-Major: LMU 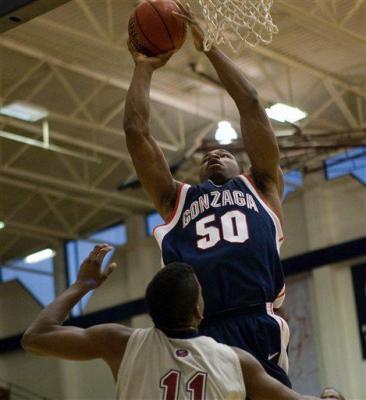 I've hit a major breaking point with the West Coast Conference.    The last two games I have seen Gonzaga play have been nearly impossible to watch.  In case you missed it, and you might have, the Zags road trip down to California concluded tonight with a 93-60 demolition of the Loyola Marymount Lions.  Gonzaga was once again led by the outstanding efforts of Matt Bouldin and Josh Heytvelt, who had 18 and 15 points, respectively.

continue reading more of the game recap after the jump...

Some people believe that you can't just show up and win a game but it was pretty obvious that Gonzaga could have kept some of their starters at home for the road trip and they would have been fine.  Loyola Marymount drops to 1-20 so far in the season and it appears that their dreams for a NCAA Tournament birth have gone by the wayside.  The Lions did have one, young bright spot in freshman Kevin Young.  The 6'8'', 185 forward finished the game with 21 points, which led all scorers.  He was also able to pull down 12 rebounds for LMU.

Gonzaga had five players in double figures.  Steven Gray, Matt Bouldin, Austin Daye, Josh Heytvelt, and Micah Downs all scored ten or more points with Bouldin leading the way.  Matt had an outstanding road trip this weekend, torching Pepperdine for 10 assists to go along with his 18 points against the Lions. He has been playing with a high level of confidence since conference play began.  Senior center Josh Heytvelt continues to dominate the competition as well.  Heytvelt only pulled down six rebounds tonight but that was enough.  Austin Daye was incredibly efficient in his 17 minutes tonight.  The big fella had another double double, his second in as many games, as he scored 14 points and had 10 rebounds.  It'd be hard to pick a player of the road trip between these three players but Austin Daye was just outstanding in his return home to California.

Jeremy Pargo was the lone starter who struggled, scoring only nine points in the rout and having four turnovers to go along with his four assists.  We've had some comments here saying that this team's best lineup at this point does not include Jeremy.  While I don't agree with that sentiment, I really do hope that Pargo can turn it around before Gonzaga takes on St. Mary's, San Diego, and Memphis.  There's no doubting Jeremy's importance to this teams eventual success.  He had a road trip to forget this weekend as he was held scoreless against Pepperdine.

Gonzaga has finally arrived at the most important piece of their schedule as they will be taking on the Gaels of St. Mary's, USD, and Memphis very soon.