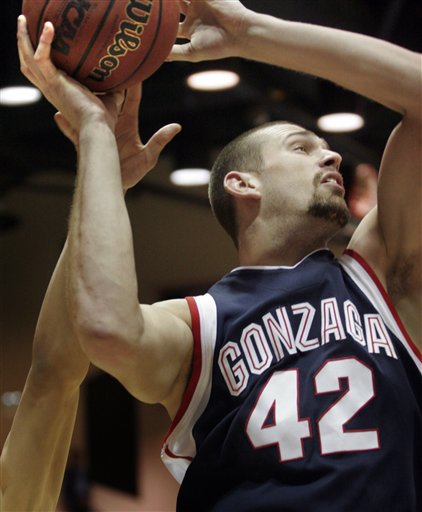 After the first four minutes and change, it was pretty obvious where this game was going. The Zags jumped out early and often on Pepperdine tonight in Malibu, scoring the first 17 points of the game and they never looked back. The Waves did in fact get on the board after Mycheal Thompson hit a jumper at the 13:54 mark but they didn't really stand a chance.

continue reading the game recap after the jump...

Pepperdine didn't look completely inept and they were able to string together some nice runs. The Waves were able to flex their youth muscle a little bit as they were led throughout the night by Keion Bell and Mychel Thompson. Bell, a 6'3'' freshman, scored 19 points and pulled down 12 rebounds in the contest and Thompson, a 2nd year player, scored 14 points in the losing effort. Like we have always stressed here on The Slipper Still Fits, Pepperdine is full of young players that have talent and Bell and Thompson are two of those players. We really do hope that they continue to progress as basketball players because right now, the bottom half of the West Coast Conference is abysmal.

Gonzaga was led by Pepperdine-killer Josh Heytvelt, who always seems to have great performances against the Waves. It may be because their big fellas are rather below average basketball players. No matter, Heytvelt scored a season high 25 points, including a personal 9-0 run to start the game off. Heytvelt scored a majority of his points in a place he should usually score them, the paint. Hopefully he can keep this trend going and commit himself to playing near the bucket.

Matt Bouldin and Austin Daye have played excellent basketball in conference play and that continued this evening. Bouldin has always been noted for his great court vision and ability to find an open man and he capitalized on that tonight with his career-high 10 assists. Bouldin had a number of great looks and his teammates were able to cash in. He also threw a great alley-oop to Micah Downs, who was awesome off the bench, for a thunderous slam. Austin Daye looks to be in complete control of his game right now and his 16 point, 10 rebound game tonight exemplified that.

We all knew tonight's game wasn't going to be much of a contest but the blueprint for success was executed very well tonight. Heytvelt, Daye, and Bouldin have continually shown well this season and are all playing at a very high level at this point in 2009. Bouldin and Daye had a couple hiccups early on in the season but have been consistently at the top of the stat sheet and Heytvelt, while frustrating to watch at times, really seesm to be playing better around the basket.

There shouldn't be much of a challenge on Saturday as the Zags travel to Los Angeles to take on the one-win Loyola Marymount Lions. I wouldn't mind have Mark Few send Bouldin, Daye, and Heytvelt home for this game because Gonzaga really should not need them to defeat the Lions.

Games with St. Mary's, San Diego, and Memphis are all right around the bend. If Gonzaga's playmakers continue to execute at a high level, they should be in prime position to take down two tough conference foes and the always-difficult Tigers.