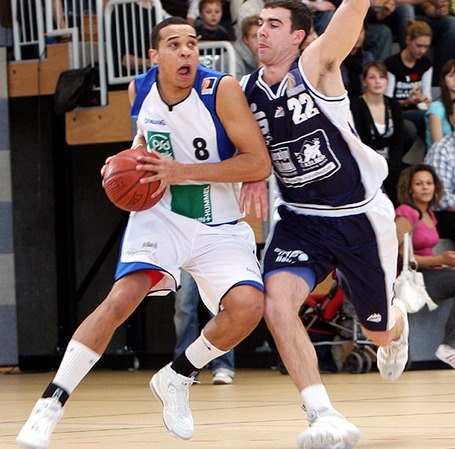 With so many different scouting and recruiting services on the Internet, it's rare for a recruit to just appear out of nowhere. However, no one....and I mean no one had any idea who Elias Harris was when he appeared as a committed prospect to Gonzaga. I'm sure many Gonzaga fans have done their research to find out more about Harris, but we decided that it would be best to interview someone who has seen Elias play. Recently, The Slipper Still Fits caught up with Thomas Kaeckenmeister, who does an excellent job of covering the international basketball scene (click here to check out his blog from the FIBA website). We woud like to thank Thomas for taking the time to answer our questions, and these answers should have everyone very excited for Elias and his tme at Gonzaga.

The Slipper Still Fits: How strong is the competition that Elias faces with his professional team? Do you think he could currently play for a top division European team?

Thomas Kaeckenmeister: Harris plays in the third division of Germany, called the ProB. The competition is high, but in comparison to the NCAA I would say a bit weaker (I'd claim that the ProA, the second German division, equals more the NCAA.) Harris is amongst the top 20 in points, rebounds, blocks and steals (http://diejungeliga.de/linkit.php?menuid=152&topmenu=23&keepmenu=inactive) in the ProB, but because of his age he would only play garbage time minutes for a top division European team. By now, he is still too young and too raw for the upper professional level and lacks of experience.

continue reading for the rest of the interview

The Slipper Still Fits: What are Elias' greatest strengths and weaknesses on the court?

A scouting report with detailed information can be found here: http://www.nbadraft.net/players/elias-harris

The Slipper Still Fits: Do you think Elias will be able to contribute immediately at a top level NCAA school like Gonzaga?

Thomas Kaeckenmeister: These days two other German players play in College Hoops: Lucca Staiger and Benjamin Fumey. Elias will need some time to adjust (culture, environment, lifestyle etc.). It is a different style of basketball overseas, but after a few games he will progress. I can imagine that Elias' game will be like a roller coaster ride in the beginning. A lot of ups and downs until he finds his game to compete in the league.

The Slipper Still Fits: How would you describe Elias' work ethic? Is he constantly improving and getting better?

Thomas Kaeckenmeister: Elias loves basketball. He works very hard. He is a quiet student of the game and listens to his coaches to become better every single day. He knows his goals and tries to achieve them. Elias is a workhorse that is constantly improving and getting better.

The Slipper Still Fits: Where have you seen the greatest improvement in his game over the past year?

Thomas Kaeckenmeister: He improved most in his defensive ability, his lowpost game and his rebounding.

The Slipper Still Fits: What NBA player would you compare Elias' game to?

Thomas Kaeckenmeister: There are a few. Shawn Marion, Gerald Wallace and Joey Graham play very much like him. But the comparison that fits best is Wilson Chandler of the New York Knicks.

The Slipper Still Fits: Where would you rank Elias among the top European players his age?

Thomas Kaeckenmeister: I see Harris in the midfield. There are better players than him in Europe, maybe even in Germany (Tibor Pleiss, Robin Benzing), but overall he is in a good average position. If the improves his outside game he could rise in the rankings.