Why are We Surprised that Gonzaga is Awful in the Clutch?

Share All sharing options for: Why are We Surprised that Gonzaga is Awful in the Clutch?

In a post that I wrote after the Portland State game, I begged someone on the Gonzaga roster to fire up this team, hell I was even encouraging them to "KG" it and make a teammate cry. Because I tend to think that my words have the power to reach this team, I was not that concerned going into the New Year's Eve game with the team that lost to a Division II team. It turns out that this blog may not be as widely read by the Gonzaga basketball team as we thought...

I tend to be a statistics addict. With pro sports, it's obvious. You look at stats and you know who won the game by looking at a few categories. Turn the ball over too much, your going to lose. Shoot lousy from the field, your probably going to lose. In college sports their is so much emotion that you might not see the whole picture from the stat line. Last night with Gonzaga, the stats did a pretty good job. From now on, I'm going to try and not watch the games and see if I can recognize a Gonzaga stat line. It would be pretty easy, just look for two things. 1) They will be outrebounded and 2) They will shoot horribly from three-point range. They succeeded at both against Utah, especially from beyond the arc where they passed with flying colors, shooting a RED-HOT 15%.

Like I said, there is more to college sports than stats. Emotion and ability in the clutch is a huge part of the college game. For the Zags, clutch is something that is historically bad.

once again, continue at your own will...

I've had about 30 directions for this post, spanning from "FIRE MARK FEW" to "It's okay, we're just tired". The tired argument completely bottomed out with the Portland State loss. They were bused to Spokane for God sakes, I'm sure they were more tired. As for the FIRE MARK FEW post, I'll give it at least until conference play.

Some of our comments lately have pointed out that all the negative trends that we have been weary of are coming true. We can't rebound, we look scared, we have no leadership, etc, etc, etc. This is true, the four losses this season have seen Pandora's Box open and sweep the Zags away. These four losses have also seen some terrible Gonzaga starts paired with the inability to close games. Arizona was up 6-0, Connecticut was up 13-5, Portland State was up 12-6, and Utah was up 14-5 before the Zags could blink. But every time, the Zags come back and make it close. They were tied with Portland State and Arizona with about two minutes left. They owned the early second half against UConn and looked in control. They were back and forth with Utah all game after the atrocious start. But when the clock winds down, Gonzaga has always been on the losing end. I'm starting to feel like I am a broken record but the clutch shooting and leadership seems to be something that is a recurring nightmare for this team. Here are two key sequences from two of Gonzaga's losses.

It's not like Demetri Goodson is lining up threes at the end of the game while we all pull our hair out. The guys involved in these two sequences are probably the three most important players on this team and are not getting it done late. These two sequences are also adaquate representations of what drives me absolutely insane about this team. In the Portland State sequence we see our "bigs" Austin Daye and Josh Heytvelt successfully miss two short range layups. This is no surprise as they have shown no real dedication to playing interior basketball. And in the Arizona sequence we see Gonzaga's reliance on the three-point shot by Jeremy Pargo. For God sakes! A three-pointer by Jeremy Pargo in a tie game on the road is the best you can give me? Why did I ever believe this was a top five team? We saw the same thing against Utah when the game was in the balance and Matt Bouldin pulled up for a transition three-pointer. Mark Few needs to do whatever it takes to get through to these guys that they are 35% from three-point land and have much better skills in other areas.

Gonzaga's biggest flaws (bad interior play and three-point shooting) come out down the stretch. This is the sign of an immature team. It 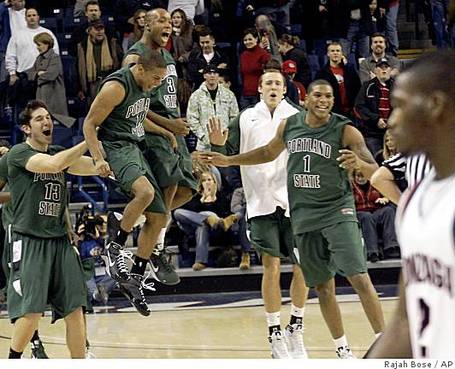 's the same deal in football or any other sport. Some quarterbacks can get you from 20-yard-line to 20-yard-line beautifully but when they hit the red zone, they throw picks or settle from field goals. This team is repeatedly freezing up in the clutch. It honestly breaks my heart to have to watch them down the stretch because it is like watching a train wreck. We saw some hints of it at the end of the game against Tennessee, Indiana was no walk in the park, and then it all came tumbling down against Arizona.

How the (expletive) can this be happening to such an experienced team? We should be the team starting fast and finishing tough. The meltdown issues of this year are nothing new to this program and have historic roots to one of the worst days in Gonzaga basketball history (and my life). Gonzaga's current senior "leaders" were there for the worst collapse in Gonzaga history. March 23rd, 2006 against the UCLA Bruins in the Sweet 16. Jeremy Pargo played 25 minutes and Josh Heytvelt committed three fouls as UCLA scored the final 11 points to beat Gonzaga. The Zags had a 17 point lead in the first half. Every year since, it has been the same story. On March 23rd, some sort of mental block went up in the Gonzaga program and I'm not sure we can get over it.

This pattern should have some very severe consequences. Maybe this is why Mark Few has been recruiting from Canada and Germany. Maybe he is trying to get players from out of the country that have no clue about March 23rd, 2006 and Gonzaga's choking ways. Like I said before, I'm not ready to march on McCarthey and demand Mark Few's job but you have to look at the coaching when you struggle like this. Whether they are not drawing up the right plays or are just flat out not getting through to these kids, it has become a serious issue.

I really never thought this would be a huge problem at the start of the year. You can fix free throws, rebounding (which does need fixing), defense, etc but it is going to be hard to change the culture of this team mid-season. All offseason we heard about the comraderie this team had with one another and how close they all were. All I want to see now is change. Change the starting lineup, change the defense we come out in, simplify the offense. Do something to make these kids stop thinking and just play basketball. There is no questioning the talent that is on this team. The upside is huge. But more often than not, upside is never reached because it is never adaquately lead. Now, whether they like it or not, they have a few more opportunities to get their shit together or completely fizzle away.