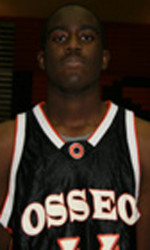 The recruitment of Sam Dower this past summer was something Gonzaga fans followed quite closely. The highly skilled big man was a priority for Mark Few and the staff since he participated in the Gonzaga Elite Camp in June. Since committing to Gonzaga in early September, Sam has turned his focus to having a dominant senior season. While we are able to find stats and occasional quotes, neither myself or BuffZag have had a chance to see Sam play live this season. In order to get a true sense for the type of season that Sam is putting together, we contacted the definitive source of Minnesota high school basketball. We were lucky enough to interview the TC Hoops Czar (click here for his terrific website), who has had the opportunity to see Sam play over the past couple of years. We would like to thanky the Czar for taking the time to answer our questions, and encourage everyone to check out his blog for updates on Sam Dower, Cole Stefan, and Kevin Noreen.

Slipper Still Fits: How does the Osseo coach use Sam on the offensive end? Does Sam primarily play in the post, and does he demonstrate a solid mid-range game?

TC Hoops Czar: Last season Osseo had a 7 foot tall Division 2 prospect in the middle.  Therefore, Sam spent time in the high post or as the backup center.  They also had a point guard who was the primary scoring option.  This season Sam is the top returning player.  While he's a good shooter who's shown the ability to stretch the defense all the way out to the 3 point line, he doesn't get the chance to show that much this season.

continue reading for the rest of the interview

Slipper Still Fits: Where have you seen the greatest improvement in Sam since last season?

TC Hoops Czar: He's really taken his big summer and continued that progress right into being a dominant go to player during the winter season.  He had 38 points and 18 rebounds in a game earlier this week and then scored 37 in a game where his #5 Orioles took on the #6 team in the state.  He played against 2010 Iowa recruit Cody Larson in the Timberwolves Shootout and put up 20 points on him in the 2nd half after sitting out most of the 1st half with foul trouble.  That helped turn a 10 point halftime lead into a 39 point blowout.

Slipper Still Fits: As a senior, does Sam seem to be a leader for this team, and if so, what kind of a leader is he (is he demonstrative, vocal, etc..)?

TC Hoops Czar: If he is a leader, he's a quiet leader.  He's calm and reserved on the court.

Slipper Still Fits: There are some very talented prospects in this class coming out of Minnesota. Where would you rank Sam among some of the other top prospects in the state?

TC Hoops Czar: Minnesota has 17 players who have currently signed to play Division 1 basketball for the 2009-2010 season.  Five of those Minnesotans are ranked in the Rivals.com Top 125 including Sam.  I rank him 4th or 5th in that group behind Minnesota recruits Royce White and Rodney Williams Jr and Wisconsin recruit Mike Bruesewitz.  He would be at a similar level as Arizona State recruit Trent Lockett.  I would put him ahead of Santa Clara recruit Raymond Cowles.

Slipper Still Fits: Where do you think Sam needs to improve the most before he is able to contribute at Gonzaga?

TC Hoops Czar: I see 2 areas of improvement.  First is to add bulk as he listed himself at 220 pounds back in August.  This will allow him to be a better defender on the post and to be a better rebounder.  Second, his post game will need to develop with more work on his off-hand and additional post moves.  Right now, his main offense is his lefty jump hook over his right shoulder.

Slipper Still Fits: How would you describe Sam on the defensive end of the court? Does he have the potential to be a dominant defender?

TC Hoops Czar: He's in a good defensive system so I think he'll be a sound defender.  He has a long wingspan for a 6'9 player which will allow him to impact shots, especially in a help situation.  He can improve his rebounding.  He has the mobillity to be able to defend players his size outside of the post.  I don't know that he has the kind of explosion or athleticism that a dominant defender would have.

Slipper Still Fits: What type of role do you think Gonzaga fans should expect for Sam next year? Is he capable of seeing big minutes as a freshman?

TC Hoops Czar: Sam can be a productive player right away for the Zags.  He's versatile enough on offense to play inside or at the high post.  He even said in an interview that he's comfortable at the small forward spot.  I doubt that you'll see him play there, but it shows he's comfortable handling the ball away from the basket.  Defensively, he's effective enough that he could be fine at the 4 or 5 based on the matchup.  A real athlete or bruiser would give him trouble right now.