Zags Coast to Victory Against USF

Share All sharing options for: Zags Coast to Victory Against USF 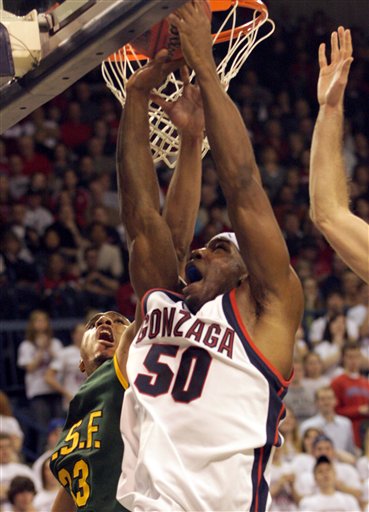 Over the past couple of seasons there were always 2-3 games in the WCC in which Gonzaga would allow a lower-level team to hang around and make life difficult. If the opening 3 games are a preview for the remainder of WCC play, it looks like this team is playing with a killer instinct we haven't seen in a long time. After opening WCC play with a 17 point victory over Portland and a 42 point victory over Santa Clara, the Zags continued their dominant play with a 85-51 victory over USF.

Leading the way for Gonzaga was the sublime Austin Daye. I was at GU for the great Adam Morrison season, and I still can't remember to many offensive performances as brilliant as the one Austin had today. Austin scored a career-high 25 points on only 14 shots. He was 10-14 from the field, 3-5 from behind the arc, and managed to grab 9 rebounds as well. The astonishing part of his performance was how easy Austin made everything look. It's starting to seem like his breakout second half against Tennessee might have given Austin the confidence to dominate every game.

Ira Brown and Josh Heytvelt each displayed great toughness and tenacity while matching up with Dior Lowhorn. Both guys grabbed 9 rebounds, while Ira scored 7 and Josh added 6. These might not seem like incredible numbers, but both held their ground in the post and dominated the paint against one of the best bigs in the conference. Many of us have questioned the toughness that Josh has, but after watching this game, I have no doubt he has the strength and grit to guard any big man in the country. Great job by both of these guys tonight against a very tough and strong USF front line.

Lastly, we need to recognize how terrific Micah Downs is playing in his new 6th man role. The past two games, Micah has come off the bench and completely changed the complexion of the game. Tonight, Micah scored 15 points and added 2 assists and 2 rebounds. It's fantastic to watch him play smothering defense, and he seems to have all the confidence in his shot again. This role seems to suit Micah perfectly, and he has really embraced being a senior leader for this team.