Zags Issue a Statement to the WCC; Dominate Santa Clara

Share All sharing options for: Zags Issue a Statement to the WCC; Dominate Santa Clara 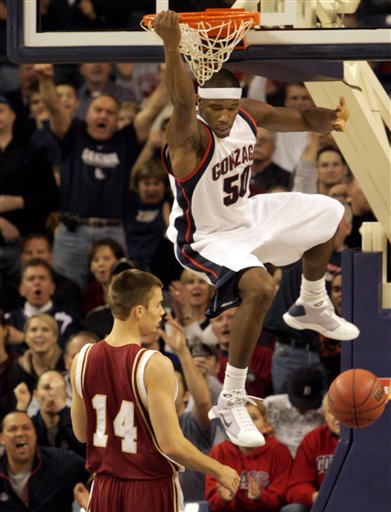 FYI...Santa Clara will no longer by #3 in my WCC power rankings...woopsie.

Heading into tonight's game, there weren't many content Gonzaga fans. The team sputtered through December and was extremely lackluster in their 17 point victory over the Portland Pilots. In tonight's game against the Broncos of Santa Clara, one of the best players in the WCC, John Bryant, traveled to Spokane. The man formally known as "Big" John Bryant (he is very thin now) came in on a roll. He's been a double-double machine all year and has had a number of 20-20 games as well. Bryant got his double-double tonight...but that was about all that went right tonight for the Broncos.

Gonzaga dominated this basketball game from start to finish, ending up with a 95-53 victory. There is never anything perfect in sports but this game was something close to perfect. Gonzaga did everything right tonight and to criticize the effort would be nearly impossible.

continue reading the breakdown after the jump...

The game started out pretty poorly. Matt Bouldin dribbled the ball of his foot, picked up a foul and Austin Daye got called for two quick fouls as well. Usually when these two don't start off well, they don't pull it all together for the duration of the game. Tonight was different as Daye and Bouldin dominated and lead this team to victory. Bouldin and Daye were not alone however. Everyone stepped up tonight and played well which is something we have not seen all year. 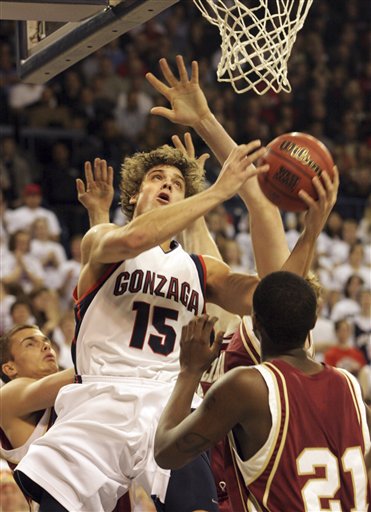 All five starters averaged in double figures and newly minted sixth man Micah Downs added nine points and a great defensive effort. Daye led all scorers with 20 points in 17 minutes, shooting a blistering 80% from the field and hitting all three of his free throws. Bouldin scored 16 on 6-9 shooting and Steven Gray added 15 points. Rounding out the guard play was Jeremy Pargo who was so silent the entire night but had 11 points and 8 assists in one of his more impressive outings of the year. He turned the ball over three times but he made some outstanding passes that made us forget about the miscues. It was one of the few times when all the guards played inspired basketball together. This season we have become accustomed to seeing Bouldin and Gray play well while Pargo struggles or Pargo and Matt play well when Steven can't find his shot but tonight the three big guns on the outside all played excellent basketball.

The guards were great but everyone knew that the big match up tonight was taking place down low between John Bryant and Josh Heytvelt. Mr. Heytvelt is a player that I have been very hard on this season. I was about to throw him under the bus tonight again when he came out and shot a contested three point shot early in the game but he really turned in on after that point. He didn't do anything extraordinary on the offensive side of the court but he really helped his team with his defense. John Bryant can look at his stats and not be too sad about tonight but for all intents and purposes, he was dominated tonight. Josh Heytvelt was very fundamental tonight and did not get sucked into Bryant's post moves and actually forced him to take a number of shots from a distance. He didn't commit the stupid foul and stayed on the court for as long as his team needed him. Without Robert Sacre, this is going to be a big thing for Josh because he can not pick up cheap fouls. Reserve center Will Foster was also excellent tonight in limited action. Foster has really started to come around on the offensive side of the court with a few nice post moves. Foster helps this team first and foremost with his defense. He alters so many shots and it was obvious that Santa Clara was unable to deal with his height. We have to give some love to Ira Brown who threw down the best dunk I have ever seen at Gonzaga. For his efforts, Ira is #1 on Sportscenters Top 10 and it is well deserved. We're dying to find a video right now so if you have a link, let us know!

Here is just a little stats to emphasize the dominance that was Gonzaga-Santa Clara. In fact, it was the largest margain of victory in the history of the Gonzaga-SCU matchup.

These stats are just astounding. The two things I usually always look for with Gonzaga stats are rebounding and assists to turnovers. Well, there is nothing to really complain about tonight. The rebounding was dominated by Gonzaga, in particular Austin Daye and Josh Heytvelt who led the team. The Zags had 20 assists (eight by Pargo) and only 10 turnovers. This is excellent especially when you add the fact that Gonzaga forced 11 steals against their opponent.

Those steals were a very small sampling of the defensive stranglehold. Led by Micah Downs and Steven Gray, the pressure in the back court was extraordinary. They forced a back court violation and forced the Broncos to call a timeout to avoid a five second call. Downs brought a lot of fire off the bench and that has got to be a tribute to Mark Few. Few did something that he does not like to do and that is shuffle the starting lineup. Gray entered and Downs sat and it appears to be working. Gray was hot early on and hit some big threes and Downs came in off the bench and played some intense defense.

Gonzaga is in great position right now. Sitting pretty at 2-0 in the conference, the Zags will take on three WCC cellar dwellers in USF, Pepperdine, and LMU in their next three games. After those three warm up games, the Zags will host the Gaels of Saint Mary's for the first of the two team's match ups.