Share All sharing options for: Zags Open WCC Play with a Victory 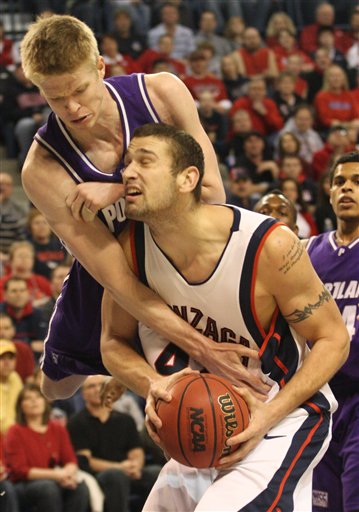 It wasn't entertaining, it wasn't impressive, but at least it was a victory. The Gonzaga Bulldogs played host to a plucky Portland Pilots team to open WCC play, and despite allowing the Pilots to hang around most of the game, the Zags were able to emerge with a 67-50 victory. Despite the 17 point victory, there are many areas of the game that the Zags can improve on as the team heads into the heart of WCC play over the next couple of months.

As I did my best to stay awake during this game, I began to try and think of some of the positives that the team could take from this game. The first aspect of the game that I really liked was how consistent and adamant the team was about getting Josh the ball in the post. In many games this season, Josh has been relegated to a 7' perimeter threat. However, against the Pilots, Gonzaga made a considerable effort to get Josh the ball in a good post position. The result was a solid 14 points from Heytvelt, who was saddled with foul trouble throughout the game. By no means did Josh play the best game of this Gonzaga career, but I was very pleased seeing him working in the post and using his great size to his advantage.

The other aspect of the game that I loved was the combination and resilience of Micah Downs and Steven Gray. I was worried that coming off the bench would be bad for Micah, as he has always stated that he prefers to start. I was pleased to see that I was wasting my time worrying about his mindset. Instead, Micah played terrific defense throughout the game, and continued his terrific rebounding. Steven was able to continue his solid play, as he scored 13 points. I still love when these two are on the court together, but seeing each thrive in their new role was something I was very pleased about.

“I was comfortable coming off the bench, but it’s what the coaches feel will help the team,” Gray said. “I just have to come out and play hard. If I play hard, things will take care of themselves.”

Downs said he’s more comfortable as a starter, but understands the reasons for the change.

“I’d prefer to start, I feel more comfortable that way, but it’s whatever is going to get the job done and get us wins and for us to go far into the tournament,” he said. “If it doesn’t work this way, I know they’ll make the right decisions. Maybe right now this is best for the team and maybe later I’ll be back in there, but who knows.”

Downs has been battling back spasms recently. He said his back was “all right” Saturday and that some days are better than others, a sentiment understood by anyone who has experienced back spasms.

Instead of focusing on individual performance that I wasn't impressed with (PG play anyone?), I want to bring up something that may or may not be an issue. Despite ending up with a 17 point win, Gonzaga played average at best. Does this team understand that despite winning by such a comfortable margin, there is a huge room for improvement? If Gonzaga plays this way against Memphis, or in the 1st round of the NCAA Tournament, they will be run out of the gym. The most important job for the coaching staff over the next couple of months is to make sure that this team doesn't settle for wins like this against inferior competition. By the time the Zags and Pilots play again, I expect Gonzaga to play with a dominant mentality, and be up by 20-25 points at the half. This team can't settle for wins like this, because they don't improve by winning games like this.