The Pilots have been one of the few bright spots in this conference thus far. Coach Eric Reveno's team has been accustomed to battling to stay out of the cellar in the conference but this year Portland finds itself sitting at third in the WCC, right behind St. Mary's and Gonzaga. Reveno, who is now in his third year as the Portland head man, seems to be turning this program around and has this team above .500 heading into conference play for the first time in his tenure.

continue reading more about the Pilots and Zags match up after the jump...

Portland's 9-6 record is especially impressive considering some of the teams they have chosen to play against. In their first 15 games, they played against Washington, Portland State, Nevada, Oregon, BYU, Air Force, and California. This is a very impressive list of teams, especially when you consider the schedules that some major conference teams are putting together. There two major wins came against Washington (haha) and Nevada. It's always great to see Washington lose, especially when it comes at the hands of a WCC team. Portland has also played some teams very tough. They lost to Portland State by five and took Oregon to overtime. Because of their inexperience they had some tough losses, falling to Northern Colorado and Eastern Washington.

The Pilots are led by a name that should be very familiar to Gonzaga fans; Nik Raivio. Nik is the younger brother of former Gonzaga star 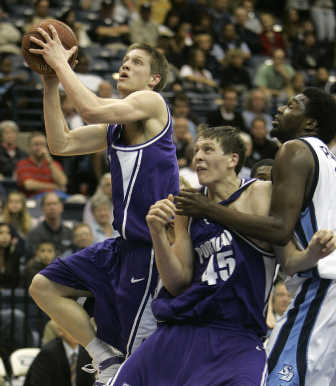 Derek Raivio and has been holding up the family name very well. Nik is averaging 16 points a game and nearly six rebounds. He's also got the size that Derek never had at 6'4'', 200 lbs. Raivio does not shoot the three-point shot the way his brother did but few have that ability. He makes up for it with his ability to get to the hoop and make plays using his size. The Pilots have some nice role players to help Raivio. Robin Smeulders and Luke Sikma are two very solid WCC forwards and have the ability to score at will in the post and Smeulders has been one of the surprise players this season. The Pilots will get more help in the paint as they hope to welcome back Kramer Knutson to the team. Knutson, a 6'9'' center suffered a concussion two weeks ago but should be ready to go Saturday. He attempted to come back against Seattle but suffered a migraine and could not play. Look for him to be the primary defender of Josh Heytvelt as he is by far the Pilots best post defender. Point guard T.J. Campbell is a very serviceable distributor of the ball for Portland. Campbell was a Junior College All-American a season ago and is averaging 10 points and five assist a game for UP. He has proved to be a real steal for this Portland team.

For Gonzaga, the West Coast Conference schedule could not come at any better time. The non conference schedule battered and bruised this team but they were able to end it on a high note with a huge win against Tennessee in Knoxville. The Zags sit at a disappointing 9-4 but luckily the schedule sets up so they won't have a tough test until the end of January when St. Mary's comes to Spokane. They should be able to build on the momentum from the Tennessee win with this sort of schedule.

While I do have a lot of respect for what Reveno is doing with the Portland Pilots, I don't expect the Zags to be challenged by the Pilots. As mediocre as Gonzaga has been this season rebounding the ball, Portland has been worse. They are only pulling down 35 rebounds a game. Sikma is their leading rebounder but he is only averaging six rebounds a game. Knutson returning should be able to help out the Pilots in this regard but look for them to struggle against the length of Gonzaga. The Pilots have also struggled on the defensively. They are allowing their opponents to shoot 47% from the field which is ten percentage points more than what Gonzaga is allowing their opponents to shoot. This is due in large part to Portland's inability to defend in the paint. Knutson should be able to help with this but Heytvelt should be able to have a field day against the Pilots. Hopefully he will avoid floating out around the perimeter and pound the Pilots in the post. It is definitely Josh Heytvelt's game to dominate if he chooses so. Austin Daye should be a match up nightmare for the entire WCC, especially for the Pilots who really have nothing to go against his length.

The one area of concern this season for Gonzaga has been perimeter defense and allowing players to go off on them from beyond the arc. We saw this happen against Arizona and Connecticut in doses and it really exploded with Jeremiah Dominguez and Portland State. The Pilots have three players that could light up Gonzaga if the perimeter defense is slacking. T.J. Campbell, Ethan Niedermeyer, and Jared Stohl all shoot over forty percent from deep. Stohl, who shoots 41% from three, is the Pilots primary deep threat and has shot the most (96). Campbell and Niedermeyer both shoot at a higher percentage but have not attempted as many. This is definitely a source of concern for Mark Few's team. I really see this as the only way that Portland will be able to keep in close on Saturday in the McCarthey Athletic Center.

Coming off the Tennessee victory, Gonzaga should be filled with confidence and I expect that to carry over on Saturday. Look for Gonzaga to put up a bunch of points due to Portland's below average defense. This should be another game where Heytvelt and Daye dominate the boards and will hopefully increase their confidence in the paint. Gonzaga should also be boosted by the home crowd and the return of the students. My prediction has the Bulldogs getting on the Pilots early and often led by they play of Mr. Heytvelt. Zags win 91-69, with plenty of alley-oop dunks and crowd pleasing plays.

Live Game Thread opens up at 4:30 PST. Stick around and chat basketball while you watch the Zags!