Despair and Disgust: The State of Gonzaga Basketball

Share All sharing options for: Despair and Disgust: The State of Gonzaga Basketball 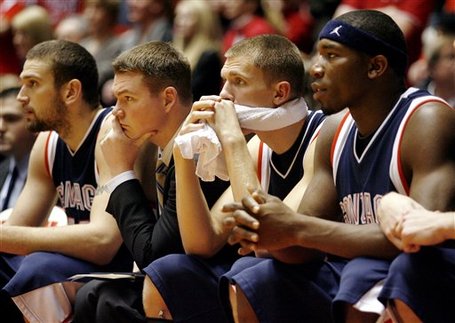 As I sat down to write this game recap, following another loss to a team that played with more heart and composure then Gonzaga, I found myself at a loss for words. After each loss, either myself or BuffZag have come up with some excuse or some type of reasoning for why this team continues to under achieve. But after the loss last night I am officially out of excuses or reasons for this team morphing from a Final Four contender to the arguably the biggest bust in the country.

Are you kidding me Matt Bouldin?: Has any player done less to warrant a starting spot then Matt Bouldin? As I was watching the final few minutes of the game, I was uncomfortable every time he touched the ball. I'm not sure which play of his made me more angry: Was it the pull up 3 when the Zags had finally cut the lead to one....or was it him getting picked from behind with less then two minutes remaining with a chance for the Zags to take the lead? I don't know what the coaching staff sees that continually justifies Matt being in at the end of the game. As depressing as it may sound, I knew Matt would miss his shot after he made the steal at the end of the game. It's about time that the minutes on this team are rewarded based on performance and not by seniority and who the coaches like the most.

Is this team too experienced?: You often hear about how professional athletes tune out their coaches after a certain number of years. It doesn't matter how great the coach is, because at a certain point, the message just doesn't get received anymore. It looks to me like this exact case may be happening with this team. The core of Jeremy Pargo, Josh Heytvelt, Micah Downs, and Matt Bouldin has been hearing the same message from the same coaches for between 3-5 years now. I think it is a realistic possibility that some of these guys have just started tuning out the coaches. Does it not seem like Josh is disinterested at times when Coach Few is talking to him? This is not a shot or indictment of the players or the coaches, but just a statement that at a certain point, the message just doesn't sink in anymore.

Can this team rebound from their current state? At this point it is hard for me to believe they can. As I was watching this team try to make a comeback against Utah, I honestly found myself wondering if they were trying to lose the game. Obivously this wasn't the case, but to have that little confidence in such a senior laden squad is stunning. It has gotten to the point where I only feel good if the ball is Jeremy or Austin's hands at the end of the game. The optimist in me looks at the fact that it is only January, and this team will have the WCC and two months to rebuild confidence and develop a consistent and strong offense. Certainly this can happen, but it will take a markedly strong improvement from both the coaches and the players for this team to reach any of the expectations that it had at the start of the season.