Chat with us about the game starting at 4:30 PST in our Live Game Thread!

I never would have thought I'd be writing this at the beginning of the season but it appears that tonight's game against the 7-5 Utah Utes has become a crucial game.  Before AJ Price hit the three-point basket to send the Connecticut-Gonzaga game on December 20th into overtime, Gonzaga was staring down a top three spot in the polls.  When the shot dropped, Gonzaga was left lying flat on the floor and Portland State took it to them.  Now, eight days later on New Year's Eve, Gonzaga attempts to get back on the winning track against the Utah Utes.

This is not the Utah Utes of Rick Majerus but, at the same time, this does not appear to be the Gonzaga Bulldogs of the Old Spice Classic (which seems like it took place years ago).  Since the Old Spice Classic, Gonzaga has dropped three out of six games and their three wins have come against an intramural Indiana team, a winless Texas Southern team, and a Washington State squad that is really struggling to find an identity.  Utah has been no better.  They dropped a head-scratcher to Idaho State but the real damage came when they lost their opening game to Division II Southwest Baptist.They have the eighth best record in the Mountain West Conference right now.

These two teams square off tonight looking for something to get them jump started and once again...I am nervous

continue reading for more on the Zags-Utes matchup...

The past eight days had to be hard for the guys.  If it seemed like an eternity to me, I can't imagine how they felt.  Even though Santa Claus came to town and school is out, their minds had to be elsewhere for a good deal of their break.  In case you've been living under a rock for the past eight days, Gonzaga lost to reigning Big Sky conference champion Portland State by seven points.  This came off the heels of one of the most disheartening losses in Gonzaga basketball history to the University of Connecticut on December 20th.   The Zags are now saddled with three losses (Arizona) and seem to be reeling a bit.  While they are still ranked as the 16th best team in the nation by the Associated Press, the Bulldogs are at a very crucial point in their season.  While this is 'just another game' in their season, there has got to be some added pressure.  After Utah, Gonzaga will travel to Knoxville to take on the Tennessee Volunteers.  A statement has to be made tonight against Utah or else the results could be catastrophic.  Losing tonight could take away many of the hopes for this team and it could have a snowball effect on the rest of the season.

It is a very emotional time to be associated with the program because there are two paths that can be taken by this team.  Lose tonight and see your season potentially slip away or dominate the Utes and carry that momentum into a very important road game with the SEC favorites.

As we turn our attention to the Utah Utes, it is worth noting the outstanding blog here on SB Nation covering the Utes, BlockU.  They are probably going to be caught up in the Sugar Bowl where the Utes take on Alabama but they do an excellent job of covering hoops as well.

As I mentioned earlier, Utah is 7-5, two of those losses are absolutely baffling.  The first came against Southwest Baptist which is basically the equivalent of playing Montana State-Billings.  The second came at the hands of Idaho State which is 3-10 thus far in the Big Sky Conference.  Their other three losses came at the hands of Oklahoma, Cal, and Utah State.  Each of these losses had to be expected.  Oklahoma is one of the best teams in the nation and Utah State and Cal have had outstanding starts to their season.  They have two good 'name' wins in Oregon and Mississippi but neither has shown much thus far in 2008. 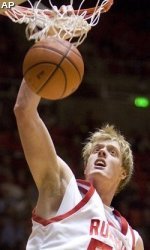 tely been a rebuilding process.  The unquestioned leader of this Utah team is Luke Nevill.  Nevill is a 7'2'', 265 pound man in the middle for the Utes.  He's averaging about 17 points and eight boards a game and has established himself the best big man in the Mountain West Conference and one of the best in the nation.  After Nevill, the Utes have four guys averaging around 10 points a game.  Out of these four players, Tyler Kepkay and Lawrence Bohra will probably give Gonzaga the most trouble.  Kepkay won't start the ballgame for the Utes but he is leading the team in minutes.  He's an extremely inconsistent player and that was shown last year when he was hot at the start of the year but was shut out in his last five games.  This year has had a similar storyline for him.  He had 23 points against Oregon, 17 points against Cal, but then only had six points against Idaho State and seven points against Oklahoma.  He seems to make the decision very early on whether or not he wants to try and take over a game.  Some games he will take 11-16 shots a game but apparently that wears him out so he follows those games up with five-shot outings.  The Utes last game against UC-Irvine saw Kepkay score one point on 0-5 shooting.  Bohra is a 24-year-old senior guard who has been a consistent scoring force in the back court.  He's averaging 10.8 points per game and brings a very mature attitude to a very inexperienced and rebuilding Utah Utes program.  Shaun Green is also a nice player for the Utes, make sure not to sleep on him.  Green is probably the most skilled big man for the Utes outside of Nevill.  At 6'8'', Green is very versatile but very inconsistent.  He drilled the Zags last year with five three-pointers when the Utes nearly upset Gonzaga at home.  Green won't start, but he's a player that could get hot.

If you are looking for a storyline tonight between these two teams, check out the three-point shooting.  The Utes and Zags have a stupidly similar trend in common.  Both teams are shooting a ton of three point baskets...but they are also missing those shots at tremendous rates.  The Utes are shooting around 18 three's a game but are only shooting 35% from beyond the arc.  Gonzaga's trend makes me sick, they are shooting about 20 three-point shots a game but are only making them 36% of the time.  We all know that Gonzaga should be excelling in other areas but that hasn't been happening and the Zags have been relying on the three-point shot.  Two players are shooting a higher three point percentage compared to last season.  Matt Bouldin (36.5 last year, 40.0 this year) is one of those players and Josh Heytvelt is the other.  He's shooting 45.8 percent from beyond the arc which is nice but look for that to decrease over the season.  Thru 11 games this season, Josh has shot as many threes as he took in 22 games last season.  I was wrong at the start of the year, I thought that Josh would take less three-pointers and I am still in the camp that he should post up down low and never come out.

Piggybacking off that last comment, the match up between Josh Heytvelt and Luke Nevill will be interesting.  Nevill wants to play in the post and Heytvelt doesn't.  Honestly, I could see this being a game where Josh Heytvelt gets in foul trouble within the first 4 minutes of the game and the Utes hang around all game long.  If this happens, get ready for your new year to start off with a sour taste in your mouth.  Not having Rob Sacre could really hurt Gonzaga tonight against the superior Nevill.  I don't think Ira Brown can even touch Nevill's nose if he was fully stretched out.  Austin Daye doesn't want any part of that match up.  That leaves us with Mr. Will Foster.  Expect Will to play significant time if Josh gets in foul trouble.  This may not be a bad thing because Foster can exceed Nevill's height and Gonzaga is so much more talented in every facet of the game that Foster's offensive ineptitude shouldn't hurt that bad.  Josh could be very useful in this game if he stays out of foul trouble.  Nevill is not comfortable playing defense outside and Josh loves it out there.  If Josh can utilize his mid-range game and draw some bad fouls on Nevill, this game could become a rout.  It all depends on which big man enforces their will on the other.

Look, Gonzaga is so much more talented than Utah.  Mark Few knows this, Jim Boylen knows this and all the players know this.  Luke Nevill is probably the best post player in this game but outside of that it is not even close.  Every other Ute is inconsistent or young.  Add to that fact that the Utes are underachieving this year.  They were picked as the fourth best team in the Mountain West and have not shown well thus far.  Inconsistent teams scare me because they are fired up very easily.  This game is just what the Utes need.  For all intents are purposes, Gonzaga's blood is in the water and Utah can smell it.  The Zags are eight days removed from their worst loss in recent memory.  They now have three losses, only one of which was expected.  They are thin down low and have a post player that would rather shoot three's and only scores in the paint off of dunks (seriously).  No one has really stepped up to lead this team and punch them in the nose and for the first time, people are looking at the coach.

Everything is working against the Zags right now.  With that being said, this could be a game that Go 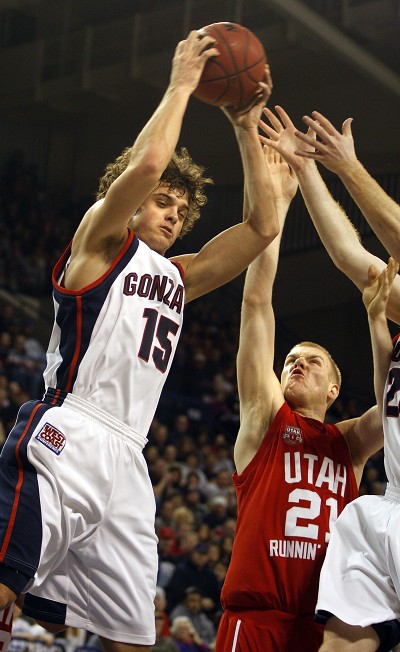 nzaga wants as well.  The WCC is historically bad this year.  LMU and Pepperdine have been downright atrocious.  San Diego's best player is out for the year.  USF doesn't have enough playmakers and Santa Clara and Portland are just hanging out.  So why is this game something that Zags need?  You guessed it.  With the WCC around the corner, Gonzaga really only has a handful of meaningful games left.  Two games against St. Mary's, Tennessee, and Memphis.  Santa Clara and San Diego will be games to watch, but if Gonzaga doesn't pull a Portland State, they will win.  This Utah game could become an immediate statement game and carry them into Tennessee, where no one really expects them to win.   Win these next two games, and the Zags are back on the national forefront because they will be favored in probably every game the rest of the year.  The students will be around for WCC play and the Memphis games so don't expect those to be losses.  So, worst case scenario, the Zags drop five games if they beat Utah tonight.  If they lose tonight, hello 7 seed in the East.

This game is huge.  And I think the Zags will respond and play big.  Luke Nevill is good but one guy is not enough to beat this team.  Unlike Portland State they will not expose Gonzaga from beyond the arc.  If they are going to beat Gonzaga they will have to play a Washington State type game where they beat up Heytvelt and Nevill goes for thirty.  I don't think that happens.  I think Matt Bouldin and Steven Gray play great tonight.  Bouldin was amazing against the Utes last year and after seeing Steven Gray against UConn I will never doubt him again.  I'd love to see something down low from Josh but don't really expect it.

When it's all said and done, I see it being close but comfortable with the Zags winning 77-65.