Time to Bury It and Move On

Share All sharing options for: Time to Bury It and Move On 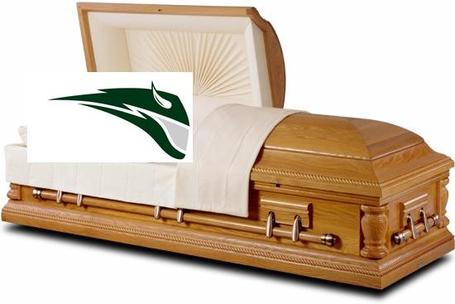 It feels like the Portland State loss happened weeks ago.  Now that five days have passed and every Gonzaga fan has had their time to freak out, it's time that we forget about this loss and get back to playing some basketball.  The Zags take the court again in three days when they travel down to the Rocky Mountain region to take on the Utah Utes.  It may turn out to be the biggest game of the season for Gonzaga because we will see how they react to the upset loss.  Mark Few and the Bulldogs can either see their season unravel and continue to sputter along or they can come out and throttle the Utes.  At this point I have no clue which team will show up but am hoping for the best.

continue reading after the jump as we attempt to forget about December 23rd...

When you win, there is not enough on the Internet to read but when you lose, it feels like the entire world is talking about you.  This has been the case for Gonzaga over the holiday break.  Every news outlet and blogger with a remote interest in college basketball has discussed the Zags and the worst part is that for some, the loss validates their opinion of this team.  Many believed this team was still a prima donna and the loss does nothing to help that perception.  Here are some of the quotes and articles that have surfaced since the loss...

Here is an article from The Bleacher Report with a quote in it that really left me shuddering regarding the Gonzaga-Portland State game.

Not to overstate it, but this is the basketball equivalent of 40-point underdog Stanford upsetting No. 2 USC or FCS/D-IAA Appalachian State beating No. 5 Michigan in college football recently.

Now I think that he may be overstating this a bit and it's not to surprising.  The author does not have a lot of respect for Gonzaga and is typically a college football writer.  The loss sucks, yes, but it won't have nearly the impact of a upset in college football.  That's the beauty of a playoff.  This story is easily "buryable" because it lacks quite a bit of coherence.  But just in case you were curious, this author puts down his rock solid fist and makes a bold declaration..

After this poor performance, there's nearly a 100 percent chance Gonzaga won't even make my top 25 in this coming weekend's poll.

I would hate to drop out of this Bleacher Report authors Top 25 but I guess I have to grin and bear it.  Moving right along, I just wanted to point this quote out from Storming the Floor.  There is no real article here but the quote basically sums up my thoughts on the Portland State loss and the scheduling prowess of Jerry Krause.

And that is why you don't schedule a game two days after playing UConn and two days before Christmas.

Yep, that about says it all.  It's an excuse, and no one likes excuses but it holds some water.  Gonzaga was the superior team but scheduling at NCAA Tournament caliber team right after playing UConn and right before Santa Claus comes is a little ridiculous.  Oh well..

Another similar article done by AOL's Fanhouse, which has risen to one of my favorite sites to read on a daily basis, implores Gonzaga fans not to jump ship quite yet.  He echoes a similar statement on the scheduling of the game.

Hey, I'm not going to sit here and spin yarns about Portland State being in the same class as Connecticut, Tennessee or Memphis. But that's part of the problem right there. These are still college kids and after playing a grueling game against Connecticut, you can imagine that these kids weren't fired up about playing Portland State.

They're kids, and are bound to have a letdown.  The key for the staff now is to not let this spread to the game against Utah because they could easily sneak up and bite the Zags as well.  What we have found out however, is that this team is not talented enough just to show up and win.  The only team that can probably do that against inferior competition is North Carolina and maybe Connecticut.  Gonzaga can't so hopefully they don't fall asleep on the court again or the season could fall apart.

The last article I will choose to point out before I completely wipe this game away from my memory is this one from Rush the Court.  This national college basketball blog puts down some hard truth regarding Gonzaga.

GU should have come out ready to eat glass in this one, but instead they allowed their heartbreaking loss to UConn over the weekend to mentally affect their play tonight.  Would that have happened to UNC?  Pitt?  Duke?  UCLA?  Gonzaga needs to get tougher mentally.

This is not a young team, it is actually a very old team.  A bulk of their scoring comes from juniors and seniors.  But where is the leadership?  We've addressed this over the past couple of days here at The Slipper Still Fits and we hope to see a result.  Toughness is something that I thought could be manfisted by having experience but after losing three of the last four games, it is clear that the toughness has not arisen yet.  We shall see if Gonzaga can turn it on.  I'm still optimistic but am a little more alarmed.

Alright, we vow to now shift our total focus to the Utah Utes.  Share any lingering thoughts with us in the comments section.  Only three days until Gonzaga seeks redemption.  Hopefully the right team shows up.