With this long break between games, we decided that we would focus on the wild world of Gonzaga recruiting for the next couple of days. Today, we will take a look at the MaxPreps Holiday Classic Tournament (Click here for website) which features 2010 targets Aaron Bright and Terrell Stoglin. This is one of the top high school basketball tournaments in the country, and features top recruits like Abdul Gaddy and Jeremy Tyler. If you have the chance, check out the videos they have on the side of the main website, as it features highlights of both Aaron Bright and Terrell Stoglin.

In case you haven't realized yet, the coaching staff has made the guard position a priority for the 2010 class. Through various articles we have read, the priority recruits appear to be Jordin Mayes, Aaron Bright, and Terrell Stoglin. I hate to say that I don't like our chances with a recruit this early in the process, but I feel like Jordin Mayes will be very difficult to get away from the LA schools.

As I mentioned before, both Aaron Bright and Terrell Stoglin are participating the he MaxPreps Holiday Classic. Each has played two games, and tomorrow is a day off for all tournament participants. 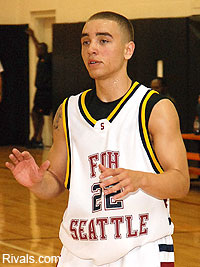 In their second game, Bellevue matched up against Windward (Los Angeles, CA). Windward is led by one time Gonzaga recruit, and now UCLA commit, Anthony Stover. If you have read any of my past work, I have never understood the appeal of Anthony Stover. His performance against Bellevue only served to re-confirm my beliefs. In the 57-48 Bellevue victory, Aaron Bright scored 18 points, while Stover managed to only score four.

Here is a quick take on Bright from the guys over at Rivals I really love the thought of a Derrick Low type player at Gonzaga.

Aaron Bright- A stocky lead guard who is strong with the ball, Bright is a lethal shooter as well with his quick release jumper. Bright projects as a high major prospect who makes good decisions, gets his team into the offense and then can come off screens away from the ball as a scorer. He has a game similar to that of former Washington State standout Derrick Low. 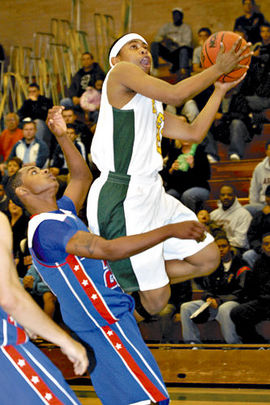 It appears I have found "my guy" for the 2010 class. Previous "my guy" recruits include: Anthony Marshall (2009; UNLV), Jordan Theodore (2008; Seton Hall), and Austin Daye (2007; Gonzaga). I'm not quite prepared to give Stoglin this honorary position, but from everything I can read, he is certainly the front-runner.

Before I get into his performance at the Holiday Classic, here is a quick blurb on Stoglin and his interest from Gonzaga.

He said Wednesday he's been offered scholarships from Maryland, Texas A&M, Penn State, Georgia Tech and San Diego. He expects an offer soon from Gonzaga, which has been recruiting him hard lately, as has Kansas State.

Should Gonzaga make the offer, expect more Terrell Stoglin updates then you could ever dream of.

Stoglin and his Santa Rita teammates have not been quite as successful as Bellevue, but it has nothing to do with the play of Terrell. Santa Rita opened the tournament against San Diego, which features Jeremy Tyler. Tyler is arguably the top player in   the class of 2010, and has drawn comparisons to Amare Stoudemire. In a terrific game, San Diego edged Santa Rita by a score of 60-58. Santa Rita had no answer for Tyler, who scored 41 of his teams 60 points. In the defeat, Stoglin scored 26 points.

With this tough loss in the opening round, Santa Rita was forced to return to the court only 12 hours later. However, this did not slow down Stoglin, as he scored 25 points in the 68-59 victory over Reno (Nevada). I am extremely excited to follow Stoglin during the rest of this tournament, and we are in the process of setting up interviews with some of the local writers who follow him.