Share All sharing options for: Pathetic and Embarrassing: Zags Lose to Portland St. 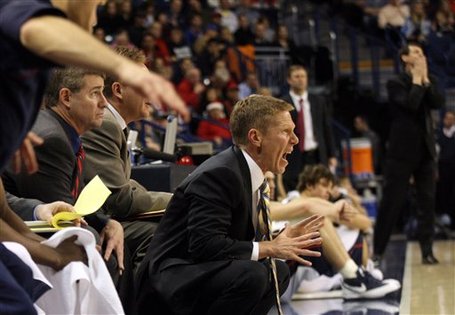 How on earth did this just happen? How can one of hte most talented teams in the country, which is led by one of the best coaches in the nation lose to Portland St.? To be honest, I don't have the answer to these questions. As I sit and write this, all I feel is utter disappointment and disgust with this basketball team. I apologize for not having a traditional post-game breakdown, but I feel that this rant will be just as effective and appealing.

I want to start this "breakdown" with a set of quotes from Coach Few and the team, which I think really sum up how I feel.

"We got what we deserve," coach Mark Few said. "They outhustled us, outrebounded us and outplayed us."

Thanks for the wonderful insight Coach Few. How about this coaching staff starts doing their job. Gonzaga doesn't play again until December 31st, and this staff can't fire up this team for one more game before the break. Pathetic job by the coaching staff for this game. I really hope that Coach Few realizes that Gonzaga is no longer a cute mid-major. This is a nationally recognized program, and its time that he realizes that. It's not acceptable to occasionally make the Sweet 16. This team has Final 4 talent, and it's time that this coaching staff starts to help this team recognize its potential. I can assure that Roy Williams, Ben Howland, and Jim Calhoun would not have allowed their teams to lose this game.

"The guys didn't take it seriously enough," Few said. "And our confidence got knocked back a bit after the UConn game."

Isn't it the job of the coaching staff to get the team focused for every game? I'm disgusted that Coach Few didn't take responsibility for this performance. It is your job to build confidence after a tough loss, and to make sure that the guys take every game seriously.

It's about time that this team loses the cockiness they have. What good teams have the Zags beat this season? Tennessee appears to be pretty average, WSU is average, and Maryland is average. People need to realize that this "difficult" non-conference schedule is difficult only by name. UConn is the only team that Gonzaga has played that is a guarantee to end up in the NCAA Tournament. This team has proven nothing on a national scale, and it's time for them to realize that they still have a lot to prove.

I can't get over how much disgust and embarrassment I feel. The one thing that is keeping me sane is the fact that we are still in December. This team can't win or lose its shot at te Final 4 in December. It must use these last couple of losses as motivation and to reaffirm the goals that it set at the beginning of the season. The potential and talent is still there, but it is up to this coaching staff and this team to achieve all that is possible.