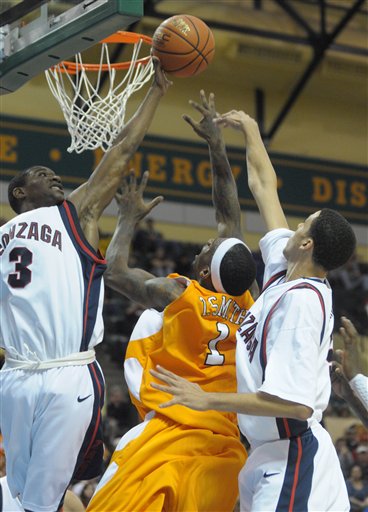 The snow tried it's hardest to postpone this game but the Vikings of Portland State were able to make it over to Eastern Washington tonight to take on the seventh ranked Gonzaga Bulldogs. The Zags are coming off a heartbreaking 88-83 overtime loss to second-ranked Connecticut. The Vikings have already started conference play, defeating Big Sky foe Montana 72-45. Gonzaga has come out victorious in the last ten meetings between these two programs and looks for #11 tonight. Portland State is also 0-11 all-time against nationally ranked opponents. Here are some things we are watching for this evening in Spokane, Washington.

see the keys to the game after the jump and join in the live game thread in the comments!

Get Over the UConn Game: The fans might not get over it, but the team has to. Any sort of emotional hangover from the tough loss could set the season into a tailspin. Gonzaga should be the favored team in each of their remaining regular season games but the rest of their non-conference schedule is very difficult. PSU and Utah are teams capable of upsets and going down to Knoxville to play Tennessee is going to be extremely difficult. Any sort of misstep tonight would be catastrophic. Portland State is an NCAA Tournament caliber team and hopefully Mark Few has his team ready for them.

Control the Back Court: Gonzaga's back court was beat up last game against the Huskies. Aside from Steven Gray, who was phenomenal, everyone had games they wish they could change. Jeremy Pargo was outstanding in the first half but was turnover prone in the second. Matt Bouldin was ineffective the entire day and Demetri Goodson was held to just one point and one assist. Jeremiah Dominguez and Andre Murray will be tough on Gonzaga tonight. Dominguez is small and quick while Murray is the more Pargo-like guard who can bruise the opposing team. It won't be easy for Gonzaga and I'm sure a player like Dominguez will get his points but they can't allow these guys to have career games or it could be a long night for the home team.

Control the Glass: I've said before that Gonzaga is the smallest big team in the nation and they have continued to prove me correct in their recent efforts. In the Connecticut game, Gonzaga was outrebounded by 10 by the Huskies even though Hasheem Thabeet only played 19 minutes. With the length and size they have in the paint, there is no reason why Gonzaga should be getting dominated on the boads. Tonight's game against PSU should be a great confidence booster for the Zags. The Vikings don't present major size in the interior and their leading rebounder, Jamie Jones, only has 7 boards a game. Hopefully Josh Heytvelt and Austin Daye lead this team in boards and stay out of foul trouble or else the Bulldogs' advantage in the paint will be nullified.