Portland State to Battle Weather Before Taking on Gonzaga

Share All sharing options for: Portland State to Battle Weather Before Taking on Gonzaga

As someone who has had their Christmas travel plans altered, it comes as no surprise to me that weather has come into play in the upcoming Gonzaga-Portland State game.  The entire Pacific Northwest has been paralyzed by an onslaught of snow and regions like Seattle and Portland, which are usually more mild, could not escape the weather.  It appears that as of Sunday night, the Vikings have secured a bus which will take them to the Spokane area and make sure this game happens as scheduled.

To be honest, this game has me extremely nervous.

continue the game preview after the jump...

The Vikings are the odds on favorite to win the Big Sky this season and were in the NCAA tournament a year ago.  They may not be a household name but the three losses they have suffered this year have been by a combined total of 10 points; one of those games went into overtime.  They tout some excellent depth.  Eight Vikings play significant minutes and five average 10 points a game or more.  A huge part of this depth has been the steady play of the transfers that Portland State has brought in.  The two big time transfers that have been solid for the Vikings thus far are Phil Nelson and Jamie Jones.  Nelson is a former Washington Husky and Jones played his first couple years as a Portland Pilot.  More than anything, these two have given the Vikings some size.  Both Jones and Nelson stand at 6'7'' which is quite large for the guard-heavy Vikings.  They are also both averaging about 11 points a game.  Jones has also been handling the glass for PSU, pulling down 7 boards a game.  The Vikings are also getting interior help from 6'8'' big man Kyle Coston, who is averaging nearly 8 points a game.

While the interior play for the Vikings has been steady and consistent, they 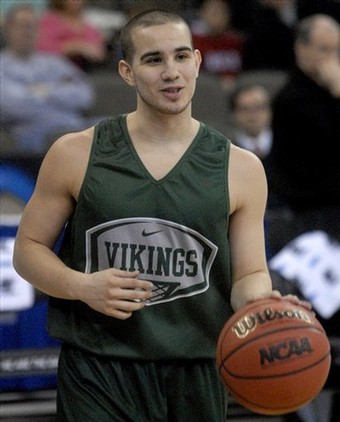 win games based on the play of their guards .  Jeremiah Dominguez (right) is the name we should all know by now.  The 5'6'' guard absolutely burst onto the scene last year and took home most every major honor in the Big Sky Conference.  Like Jamie Jones, Dominguez started off his college career at Portland but transferred over to PSU.  He averaged 14 points and 4 assists a game last season and was named League MVP as well as Newcomer of the Year.  Jeremiah had to sit out two games this year to let a bone chip in his finger heal but is back in the lineup and leading the team in scoring.  He has a tremendous knack for getting to the rim and making tough drives and is also a dead-eye three point shooter, hitting on 43% of his attempts from beyond the arc this season.  Andre Murray and Dominic Waters also play key roles in the backcourt for the Vikings.  Like Nelson and Jones, they are both averaging around 11 points a game.  Murray started off the season horrendously slow but has been lighting it up recently and led this team while Dominguez was sidelined.  Waters is another prized transfer for the Vikings.  He opted to leave sunny Hawaii for Portland State and has seen his choice pay off.  Waters does not typically start for PSU but has been play starters minutes and has been flawless through the season.  He has brought a very consistent scoring force to an already dangerous back court.

The Vikings are one of those teams that can shock top-ranked program.  In all honesty, the Zags should come away with a victory in this ball game.  They have superior talent at every position and have more depth from top to bottom.  However, after that excruciating loss to Connecticut, I'm worried about the emotional hangover.  This game also falls on the day before Christmas Eve and also before another major road swing which will take the Zags down to Utah and then over to Tennessee.  This is one of those 'trap games' that I hate Mark Few for scheduling.  I'm sure the loss is still in the heads of every player especially the guys that did not play up to their potential; guys like Jeremy Pargo, Matt Bouldin, and Josh Heytvelt.  It's going to be very interesting to see how they respond to the loss and to all the other circumstances around them.

Like I said before, on paper Gonzaga is the clear favorite.  There are a number of things that should be exciting to watch tonight when the two teams (hopefully) square off.  The Zags should be the superior team on the wings and in the post.  Phil Nelson and Jamie Jones have been nice for the Vikings but guys like Josh Heytvelt, Austin Daye, Micah Downs etc should have their way with them for the most part.  I'd love to see some post moves from Heytvelt against PSU.  As I try to rack my brain about the Battle in Seattle, I can't remember one time where he put together a nice, fluid, and successful post move.  Basically everything was a dunk in transition or a three-point shot that he has fallen in love with all over again.

The matchups will be fun in the backcourt.  Both Matt Bouldin and Jeremy Pargo have to get back on track.  Pargo was hampered with cramps in the second half of the UConn game which made him completely ineffective and Bouldin could not get even the simplest of shots to fall.  Dominguez and Murray are not AJ Price and Jerome Dyson but they are very skilled guards that can put up points in a flash.  I don't think the hangover will last too long on Pargo and Bouldin though.  Both are veteran players who have their fair share of bad games and doubters and should be ready to dominate tonight.  Hopefully Steven Gray can build on his beautiful game against UConn and helps the Bulldogs get back on track.

After writing this piece I feel a lot better.  The loss against Connecticut and crybaby Calhoun sucked but the Zags are so good at bouncing back and dominating teams at home that this game shouldn't be too big of an issue.  I look for Matt Bouldin and Josh Heytvelt to know their roles and get themselves back together.  I pray every game that Josh doesn't shoot a three-point shot so I will do that again.  Both teams score plenty of points so expect a high-scoring affair that should be appealing to the senses.

When it's all said and done I look for the Zags to regroup and take down the Vikings, 88-70.