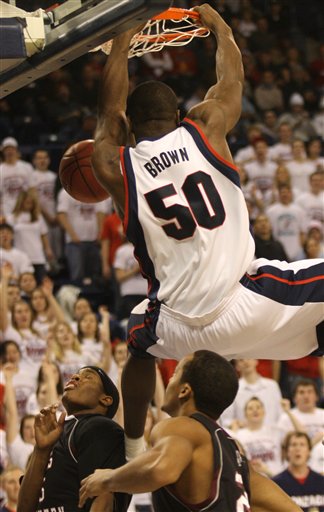 Tonight was fun for the Gonzaga Bulldogs.  Yes, there was a bit of worry because Texas Southern played Texas so close but all the worry was quickly extinguished by a Gonzaga barrage on the Tigers of TSU.

What made this game tonight all the more exciting was the fact that it was in the face of the biggest snowstorm that the city of Spokane has ever seen.  As Mark Few said before gametime:

"I shoveled for six hours today, until an hour before game time," Few said.

That was the way it was for most Gonzaga students and even players who had to dig out before heading to the arena.  The snow did not affect Gonzaga however, who performed at a very high level tonight, defeating Texas Southern in a laugher, 84-42.

It was everything that we could have wanted from the Zags tonight and a litte bit more.  As we mentioned on The Slipper Still Fits, we were hoping to see some enthusiasm from the players tonight and we saw plenty of it.

Keep reading more about the Texas Southern/Gonzaga game after the jump...

Gonzaga was welcome home tonight by plenty of students that braved the cold weather to see their team play at a high level.  Here are some of the performances that we were happy to see: