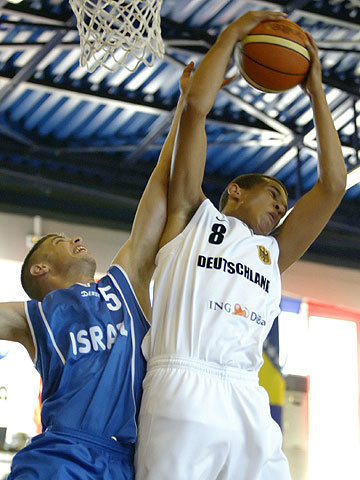 What a weird recruiting cycle 2009 is turning out to be.  Mark Few and the coaching staff have apparently become very bored with recruiting people from inside the United States.  Aside from Sam Dower, Gonzaga inked Mangisto Arop and Bol Kong both Sudanese natives that now live in Canada.  The Kong situation is still up in the air with his Visa issues but now it appears that Gonzaga has landed German forward Elias Harris from Speyer, Germany.  Harris measures in at about 6'8'', 225 pounds and has been lighting it up in the German National League.  Obviously, being a foreign player we don't have Rivals or Scout pages for Mr. Harris but there is a plethora of information about him across the Internet.  Here is a FIBA writeup on the newest member of the Gonzaga Bulldogs.

Playing for BIS Speyer in the German second division ProB, Harris is third in scoring with 22,2 points per game. His explosive style of play electrifies the fans more and more. But it will last one for one more season. After finishing his high school, Harris wants to go abroad to play college basketball in the USA. Will he become the heir of Dirk Nowitzki in the NBA one day?

Pretty high praise I would say.  From what we can gather, this kid appears to ooze athleticism.  Born in 1989, Elias is 19 years old and is still a pretty raw talent.  He suffers from some of the same negatives as so many other players with exceptional athleticism.  Here are some negatives that NBADraft.net had to say about him in 2007.

Harris is a terrible ball handler when it comes to dribbling, and thus is somewhat neutralized as a one-on-one player...Elias works hard on the glass, but doesn't always box out, relying on his leaping ability to get him boards...Elias has a mean streak but doesn't always turn it on. With his package of skills and athleticism should be dominating his age group, but hes not.

Take this with a grain of salt because it is so old but I'm sure some of it still carries over today.  Obviously he is not going to be able to come in right away and dominate the opposition.  But the good thing that I am noticing is that he has caught the eye of NBA scouting services meaning that he does have the skill to play big time college basketball.  He made plenty of strides and in August of this year, his German national team won Gold in the U20 European Championships.  Here is how Harris stacks up against his competition in Europe.

Not bad at all.  I love the fact that he shoots at a high percentage.  He had 6.1 rebounds per game in the U20 Championships which put him around 30th in the league.  He had 1.8 turnovers per game which means, at least to me, that he is improving because NBA Draft.net basically said he was a turnover machine in 2007.  Compare this with a guy that Gonzaga was going after hard, Jeff Taylor, who had 2.9 turnovers per game.

Obviously, we don't know a whole lot about this kid but it looks like the positives are there.  I guess this can officially put the Daequon Montreal recruitment to rest because this kid has virtually the same build and strengths.  Gonzaga continues to flex it's muscles overseas and in Canada.  If the Kong situation works out and we get Guy-Marc Michel in 2010, the Zags could have five players with international roots.  Michel, Kong, Arop, Harris, and Sacre.  There is definitley a reason to get excited for Harris and it really does help cover a huge hole for next year.  Dower and Harris will both provide some good size to fill in for Heytvelt and Brown and Arop can fill in at the wing position for Micah.  If Kong comes, this team could just reload instead of rebuild.