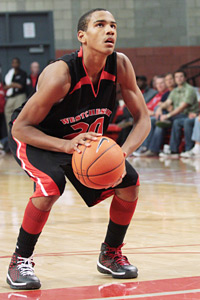 While Gonzaga fans are focused on the potentially great season at hand, the coaches don't have that luxury. The staff has done an excellent job of stockpiling terrific talent for the class of 09', and now have turned their attention to the class of 2010. With the Zags ranked in the top 10 this season, Coach Few has turned his attention to some of the best talent in the country. One of the top prospects that the Zags have turned their attention to is Jordin Mayes of Westchester high school (CA).

The Slipper Still Fits was able to pick the mind of Eric Sondheimer, who covers the high school basketball scene for the LA Times. Sondheimer has had the opportunity to see Mayes play on multiple occasions, and we would like to thank Eric for taking the time to answer our questions.

The 6'2 guard is one of the top prospects on the West Coast, and is part of a very strong backcourt at Westchester. His ability to shoot the ball from anywhere on the court is what makes him such a coveted prospect.

"Jordin is playing mainly shooting guard right now because Westchester's top player is a point guard, Dominique O'Connor" said Sondheimer. "Jordin is an outstanding shooter and I'm impressed with his improvement in shooting off the dribble. He already was efficient when he was left open. Now he seems to be able to create more scoring opportunities, though he still has a ways to go."

While his shooting ability has garnered him the attention of some of the top schools in the country, Eric believes that there is still lots of room for improvement.

"Jordin's shooting skills are his strength. His weakness is sometimes disappearing on the floor and maybe not moving without the ball enough to get open. Teams are going to focus on preventing him from shooting, and he needs to find ways to create opportunities for himself."

With the great amount of talent that is produced in California every year, The Slipper Still Fits was curious to see where Eric ranked Jordin among the top juniors in the state.

"I'd rank Jordin one of the best junior guards in the Southland and a definite Division I prospect." Eric said. "As far as Jordin's potential colleges, I think it will all depend on his development this season. Westchester looks very good early on and he'll have a chance to play some very good teams. If he keeps improving, then it will be interesting if top Pac-10 Conference teams become serious about him. I think it's a little too early to project how high he'll go as far as schools are concerned.

Obviously, we were most interested in trying to figure out just how much interest Jordin has in Gonzaga. According to Eric, UCLA and USC seem to be the teams to beat.

I don't know how serious he is about Gonzaga. I think it all depends whether the locals, USC and UCLA, become serious. They are watching.