Share All sharing options for: Jordan Hill Dominates as Zags Fall to Wildcats 69-64 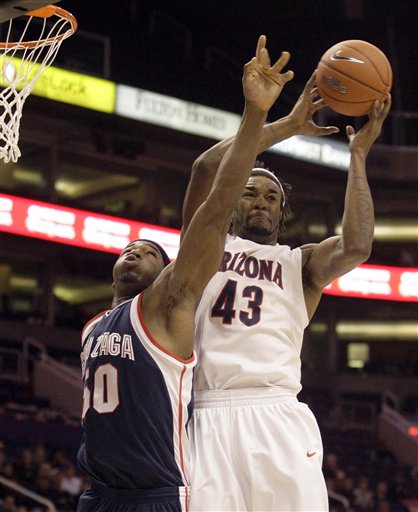 Well that picture basically sums up the entire game.  We pointed out in our pregame breakdown that the match up of Jordan Hill and Josh Heytvelt was going to dictate this game.  Jordan Hill finished the game with 22 points and 7 rebounds and was ridiculously efficient.  He struggled with some early fouls but it never affected his play and he dominated throughout.  Conversely, Josh Heytvelt was nowhere to be found.  He finished with six points and had numerous turnovers in the paint.  This does not bode well for the Battle in Seattle against UConn.  The big 3 of Hill, Budinger, and Wise had 57 points compared to the 64 points scored by the Zags.  Inexcusable.

Gonzaga came out flat and Arizona punched them in the mouth.  We didn't see any major run by the Zags because Arizona did not allow it.  Every big shot was matched by the Wildcats or Gonzaga did something to stop itself.

All the negatives that have been building up through the season came out in full force for Gonzaga.  Gonzaga shot 20 three-pointers.  Why, why, why?  We don't need it.  Their were key turnovers and sloppy execution and more head scratching coaching decisions.  I can recall three key points where the Zags called a timeout and came out of it looking like they had no clue what was going on.

The positives are few.  Austin Daye was outstanding.  I've never seen him play so well.  He finished with 22 points and 5 blocked shots and was just terrorizing the Wildcats.  However, late in the second half he was left out of Gonzaga's offensive plans.  Instead the coaching staff decided it was better to have our guards drive under the hoop and turn the ball over or step out of bounds.

Allow this one to soak in for a while, we're going to.  The top 5 was fun.  The good news is that Gonzaga has a chance to show their mettle in six days.  #2 UConn comes calling.